In the context of data science and machine learning platforms, capacity is defined as the maximum amount of data that a software is able to analyze.

In this post, we compare the load capacity of three machine learning platforms: TensorFlow, PyTorch and Neural Designer for an approximation benchmark. These platforms are developed by Google, Facebook and Artelnics, respectively.

As we will see, Neural Designer is able to load a dataset x1.8 larger than TensorFlow and PyTorch.

In this article, we provide all the steps that you need to reproduce the results using the free trial of Neural Designer.

The maximum amount of data that a software is able to analyze depends on different factors. Some of the most important ones are the programming language in which it is written, and how the memory usage works internally.

The following table summarizes the technical features of these tools that might impact their memory usage.

Even though the core of the three platforms is programmed in C++, their interfaces are different. The most common use of TensorFlow and PyTorch is through a Python API. On the other hand, Neural Designer uses a C++ GUI.

As we will see, the fact that an application has a Python interface, results in a higher memory consumption, which means a lower capacity to load the data.

To test the capacity of the three platforms, we will try to load different Rosenbrock datafiles, fixing the number of variables and changing the number of samples. The following table shows the correspondence between the size and the total number of Rosenbrock samples.


To create these files check this article: The Rosenbrock Dataset Suite for benchmarking approximation algorithms and platforms.

The number of samples is the only parameter that we change to perform the comparison tests. The other parameters are constant. The next picture shows the bencharmaks set up.


For each platform (TensorFlow, PyTorch and Neural Designer) we run the above benchmark, increasing the number of samples, until the memory chashes. We consider a successful test if it can load the CSV file and perform a training.

The next step consists in choosing the computer in which we will train the neural networks with TensorFlow, PyTorch and Neural Designer. For a capacity test, the most important feature of the computer is its memory.

To make the results easier to reproduce, all calculations have been done on an Amazon Web Services instance (AWS). In particular, we have chosen the r5.large.. The next table lists some basic information about the computer used here.

The last step is to run the benchmark application using TensorFlow, PyTorch and Neural Designer, and then compare the capacity results provided by those platforms.

These results can also be depicted graphically.

From these results, we can conclude that Neural Designer is able to load a dataset x1.8 larger than TensorFlow and PyTorch.

The next picture shows that Neural Designer is able to perform a training with 9 billion data points in a 16GB RAM computer. 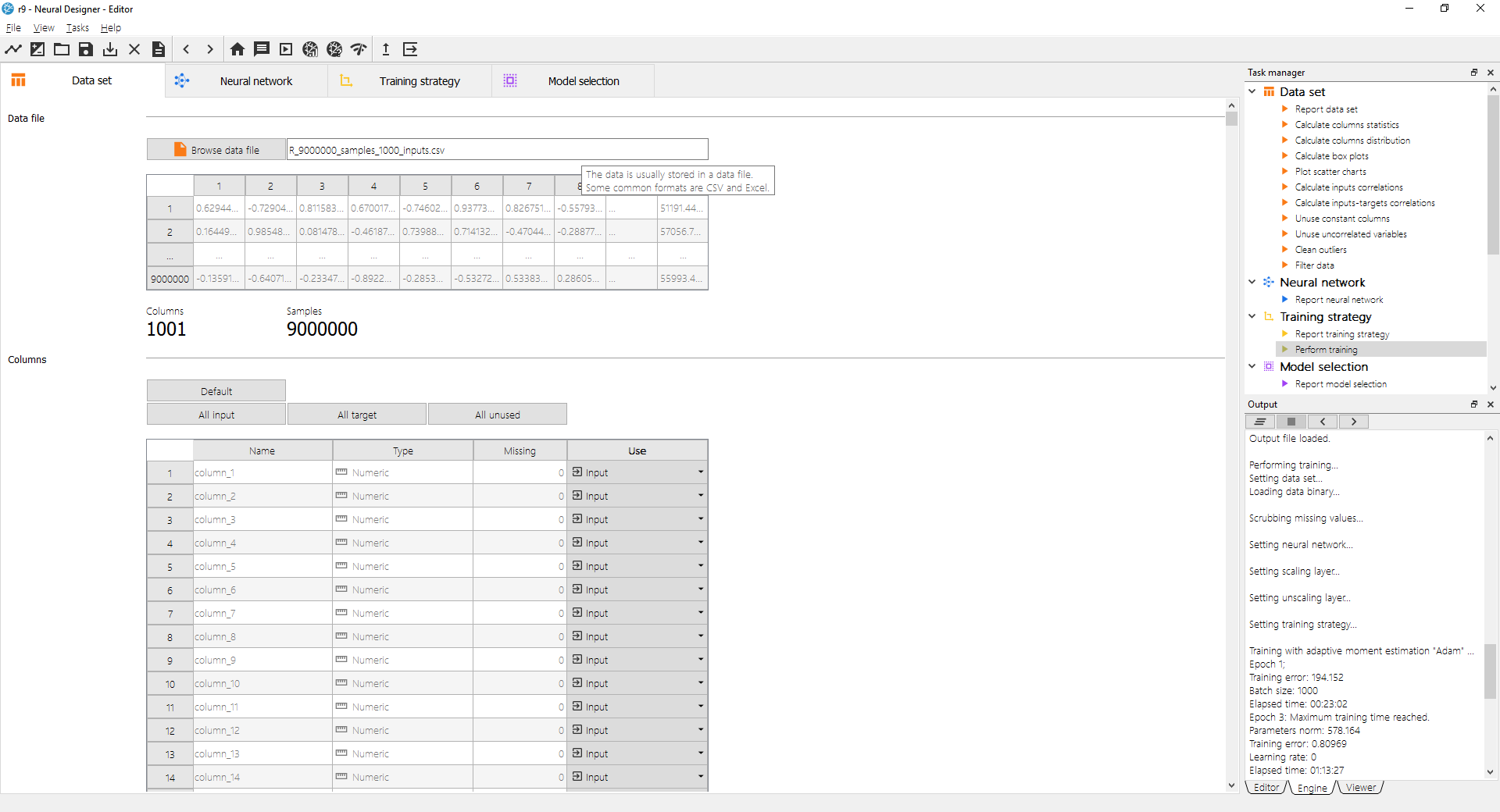 The following picture shows how TensorFlow runs out of memory when trying to load a datafile containing 6 billion data. 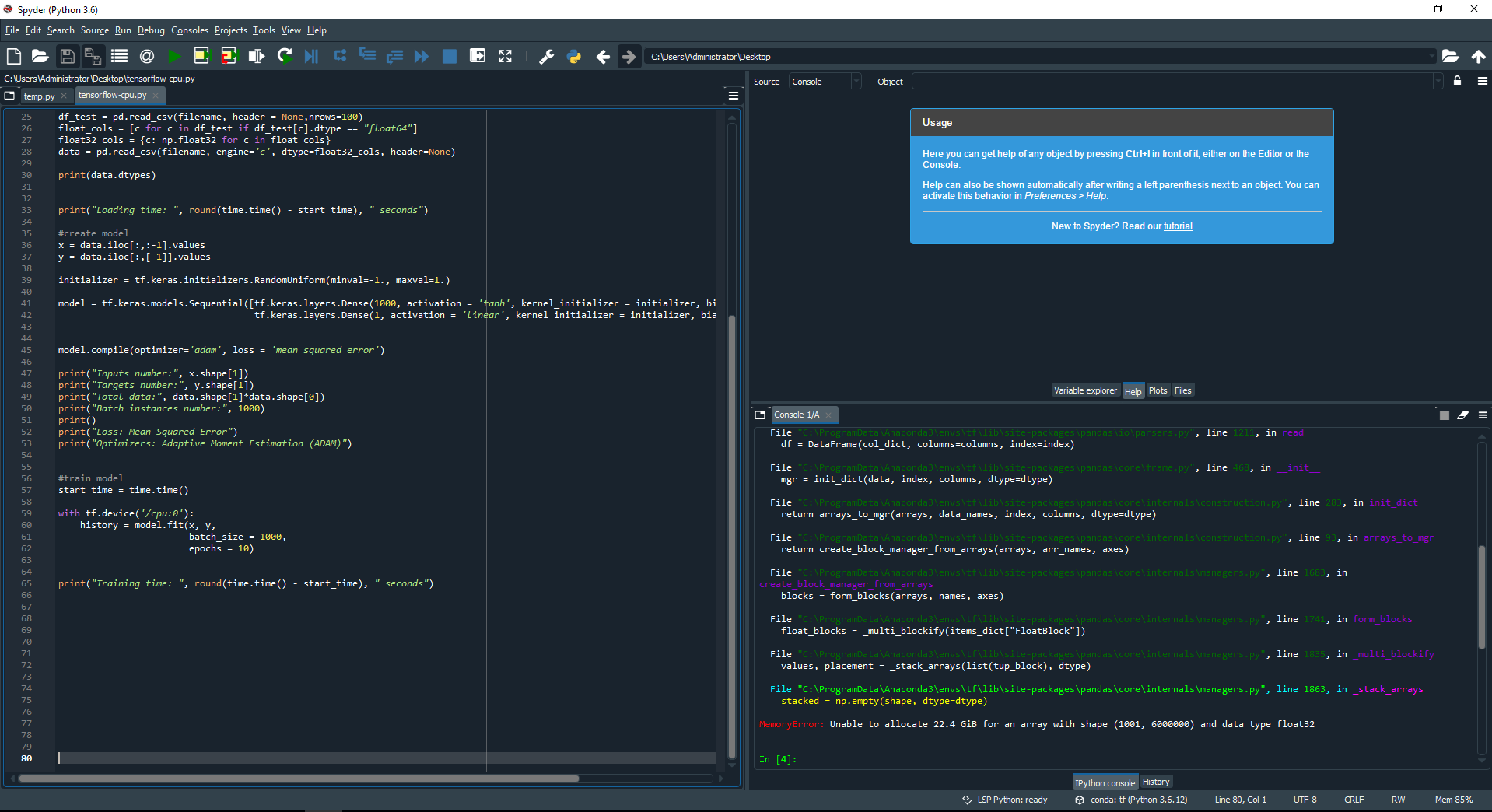 As we can see, when the external module Python pandas in TensorFlow tries to load 6 billion data, the platform crashes due to lack of RAM memory. TensorFlow's maximum capacity is 5 billion data.

The next picture shows how PyTorch also runs out of memory when trying to load a datafile containing 6 billion data. 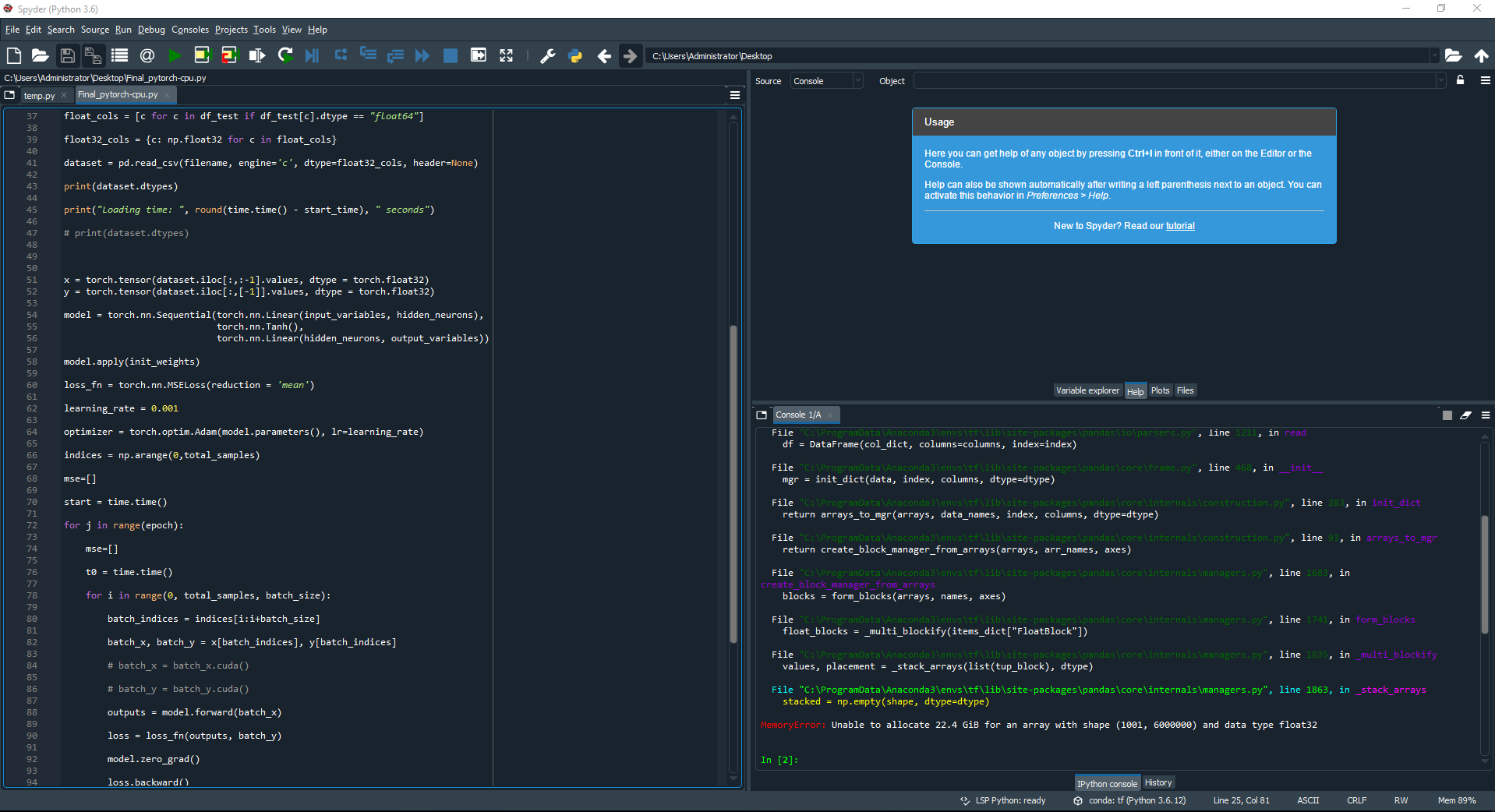 This difference is due to the fact that TensorFlow and PyTorch use an external module (Python pandas) to load data while Neural Designer uses its own function to load data, which clearly offers an advantage.

Indeed, Python is a high-level programming language, but this causes that softwares which use Python to load the data have a lower capacity.

If you want to reproduce these results, download the free trial of Neural Designer and follow the steps described in this article.