Neural networks have universal approximation properties, which means that they can approximate any function in any dimension and up to a desired degree of accuracy.

The most used types of layers used in approximation, classification and forecasting applications are the perceptron, probabilistic, long-short term memory (LSTM), scaling, unscaling and bounding.

In other types of applications, such as computer vision or speech recognition, different types of layers, such as convolutional or associative, are commonly used.

The following figure shows a perceptron layer. It receives information as a set of numerical inputs. This information is then combined with the biases and the weights. Finally, the combinations are activated to produce the final outputs. 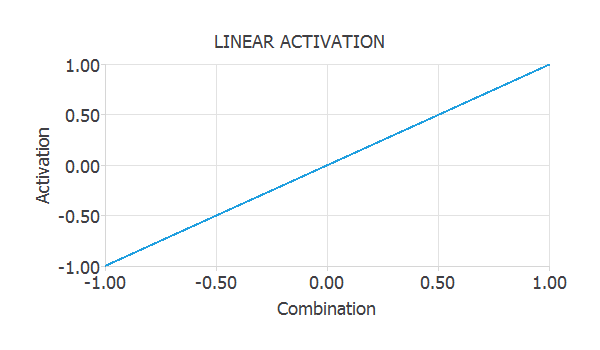 The hyperbolic tangent is one of the most used activation functions when constructing neural networks. It is a sigmoid function which varies between -1 and +1. $$ activation = tanh(combination) $$ 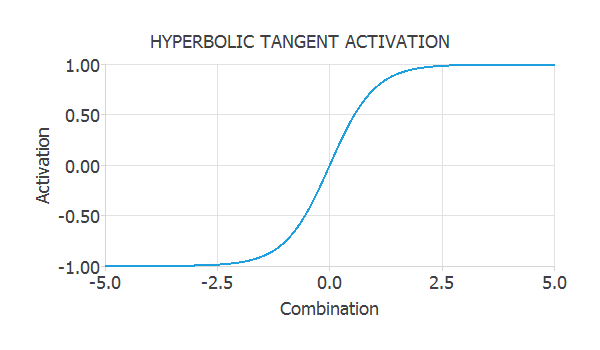 The logistic is another type of sigmoid function. It is very similar to the hyperbolic tangent, but in this, case it varies between 0 and 1. $$ activation = \frac{1}{1+e^{-combination}} $$ 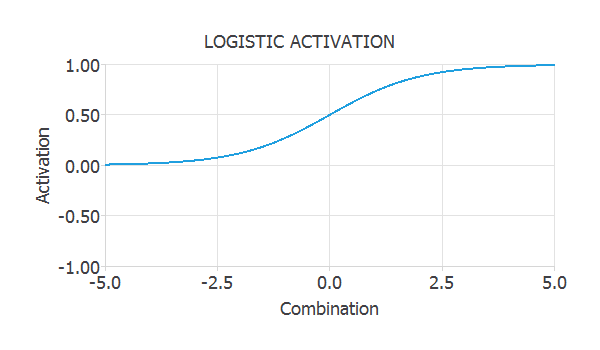 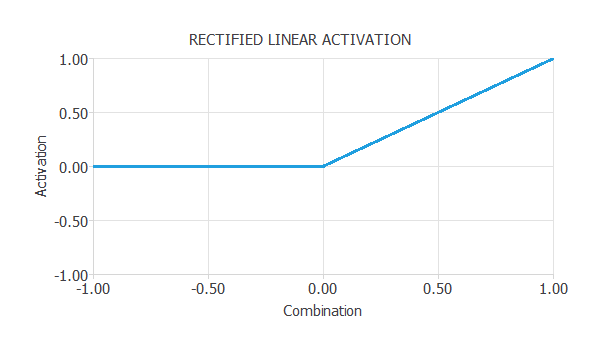 You can read the article Perceptron: The main component of neural networks for a more detailed description of this important neuron model.

The following figure shows a probabilistic layer. It is very similar to the perceptron layer, but the activation functions are restricted to be probabilistic.

Some of the most popular probabilistic activations are the following:

The logistic activation function is used in binary classification applications. As we know, it is a sigmoid function which varies between 0 and 1. $$ probabilistic\_activation = \frac{1}{1+e^{-combination}} $$

This method is used in multiple classification problems. It is a continuous probabilistic function, which holds that the outputs always fall in the range [0, 1], and the sum of all is always 1. $$probabilistic\_activation = \frac{e^{combination}}{\sum e^{combinations}}$$

The following figure shows a LSTM layer. It receives information as a set of numerical inputs. This information is processed through a forget, input, state and output gates and stored in a hidden and cell states. Finally, the layer produces final outputs. 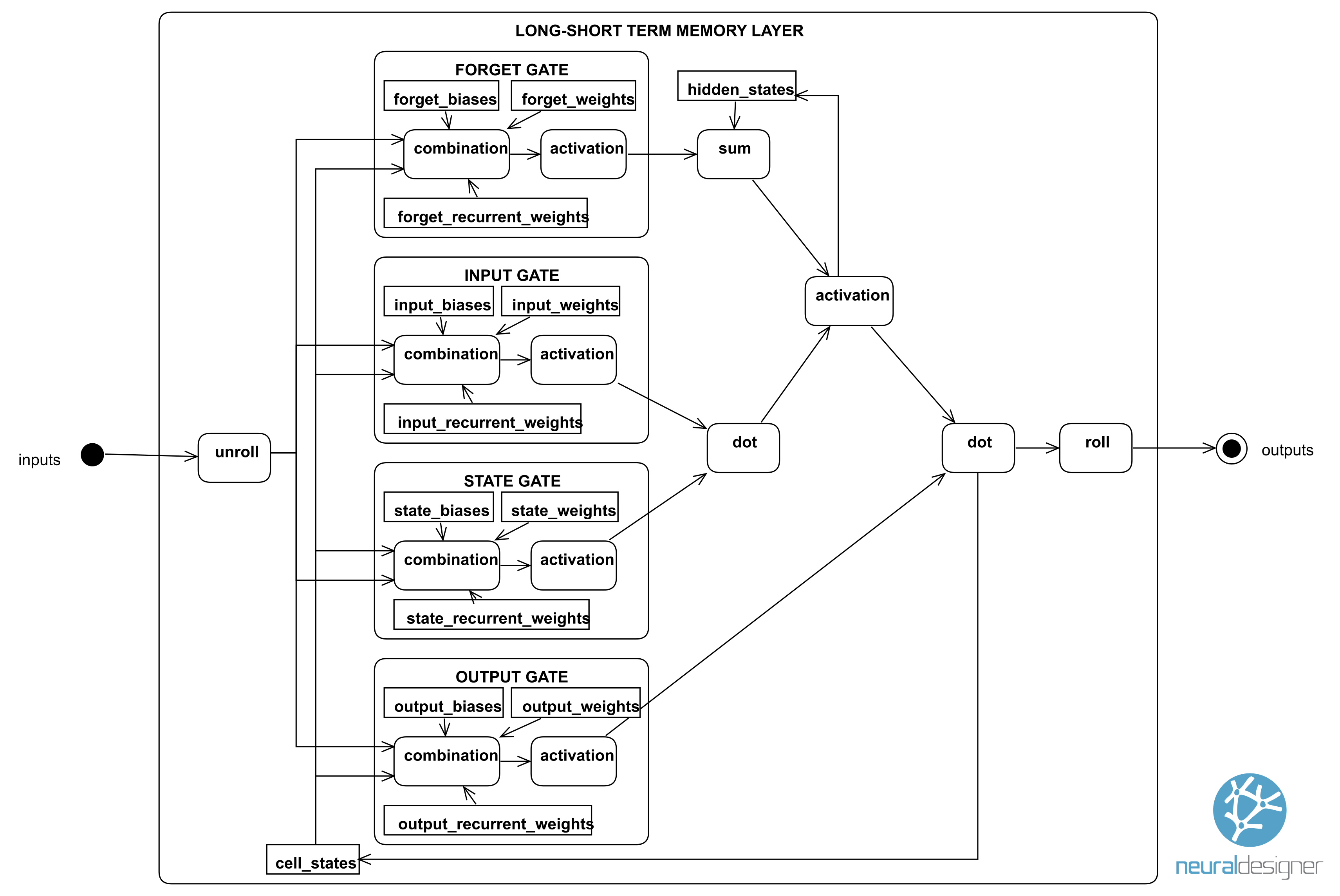 As we can see, long-short term memory (LSTM) layers are quite complex and contain many different types of parameters. That structure makes them suitable for learning dependencies from time series data.

In practice, it is always convenient to scale the inputs to make all of them have a proper range. In the context of neural networks, this process is performed by means of the scaling layer.

The scaling layer contains some basic statistics on the inputs. They include the mean, standard deviation, minimum and maximum values.

Some scaling methods very used in practice are the following:

The minimum and maximum method produces a data set scaled between the values −1 and 1. This method is usually applied to variables with a uniform distribution. $$ scaled\_input = \frac{input-minimum}{maximum-minimum}$$

The standard deviation scaling method produces inputs with standard deviation 1. This is usually applied to half-normal distributions, that is, variables centered at zero and have only positive values. $$ scaled\_input = \frac{input}{standard\_deviation}$$

The scaled outputs from a neural network are to be unscaled to produce the original units. In the context of neural networks, the unscaling layer does this.

An unscaling layer contains some basic statistics on the outputs. They include the mean, standard deviation, minimum and maximum values.

The minimum and maximum method unscales variables that have been previously scaled to have minimum -1 and maximum +1, to produce outputs in the original range, $$ unscaled\_output = \frac{scaled\_output-mean}{standard\_deviation}$$

The logarithmic method unscales variables that have been previously subjected to a logarithmic transformation, $$ unscaled\_output = minimum\\+0.5(\exp{(scaled\_output)}+1)(maximum-minimum)$$

In all cases, the scaling of the targets in the data set must be synchronized with the unscaling of the outputs in the neural network. Neural Designer does that without any intervention by the user.

In many cases, the output needs to be limited between the two values. For instance, the quality of a product might be comprised between 1 and 5 stars.

The bounding layer performs this task. It uses the following formula:

A neural network can be symbolized as a graph, where nodes represent neurons, and edges represent connectivities among neurons. An edge label represents the parameter of the neuron for which the flow goes in.

The next figure represents a neural network with 4 inputs, several layers of different types, and 3 outputs. 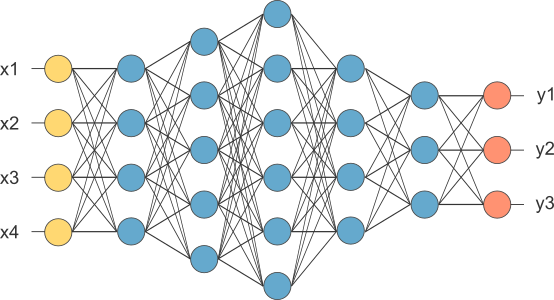 The model parameters involve the parameters of each layer in the network architecture.

The number of adaptable parameters, \(d\), is the sum of parameters in each layer.

As we have seen, a neural network might be composed of different types of layers, depending on the needs of the predictive model.

Next, we describe the most common neural network configurations for each application type.

The following figure represents a neural network to estimate the power generated by a combined cycle power plant as a function of meteorological and plant variables.

A classification model usually requires a scaling layer, one or several perceptron layers, and a probabilistic layer. It might also contain a principal component layer.

Most of the time, two layers of perceptrons will be enough to represent the data set.

The following figure is a binary classification model for the diagnose of breast cancer from fine-needle aspirates. 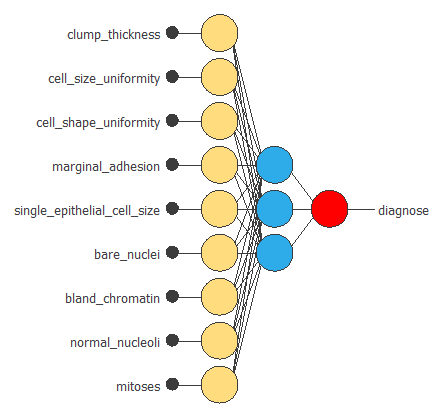 Forecasting applications are usually used for predicting a continuous variable. In this case, they might require a scaling layer, a long-short term memory layer, a perceptron layer, an unscaling layer and a bounding layer.

The following figure is a 1-day ahead forecasting model for the levels of NO2 in a city. 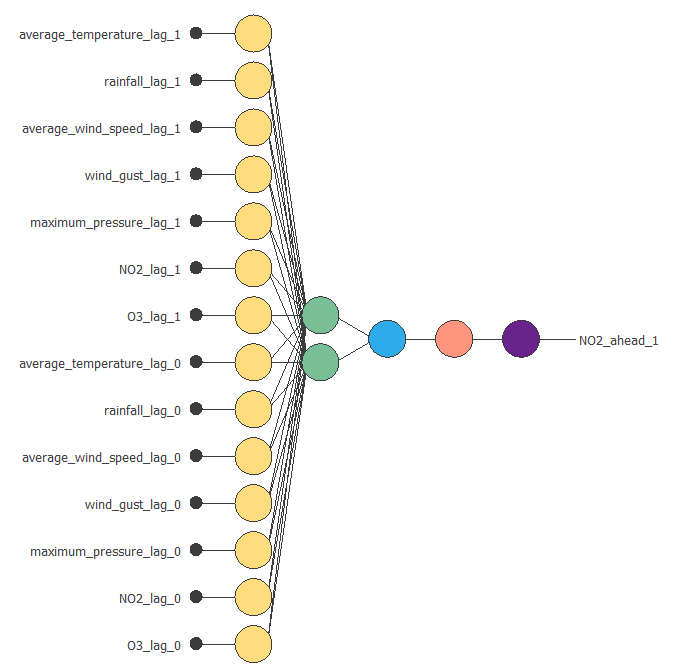 The above neural network has 14 inputs and 1 output. It consists of a scaling layer (yellow), a LSTM layer with 2 neurons (green), a perceptron layer with 1 neuron (blue), an unscaling layer (red) and a bounding layer (blue).