The objective of this example is to predict customer's default payments in a bank. This project's primary outcome is to reduce loan losses, but real-time scoring and limits monitoring are also achieved.

This example aims at the case of a customer's default payments in a bank. From the perspective of risk management, the result of the predictive model of the probability of default will be more valuable than the binary result of classification - credible or not credible clients. 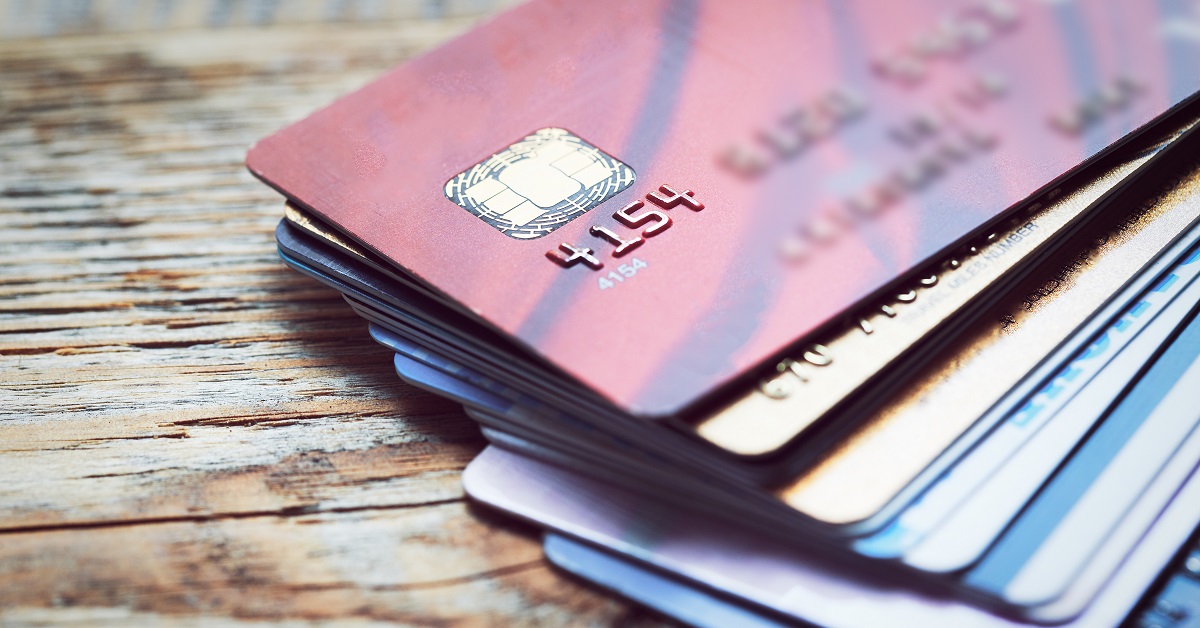 This is a classification project, since the variable to be predicted is binary (default or not).

The goal here is to model the probability of default as a function of the customer features.

The data set is composed of four concepts:

The data file credit_risk.csv contains the information used to create the model. It consists of 30000 rows and 25 columns. The columns represent the variables, while the rows represent the instances.

On the other hand, the instances are divided at random into training, validation, and testing subsets, containing 60%, 20%, and 20% of the instances, respectively. More specifically, 18000 samples are used here for training, 6000 for selection and 6000 for testing.

Once the data set is configured, we can calculate the data distribution of the variables. The next figure depicts the number of customers that do and do not repay the loan. 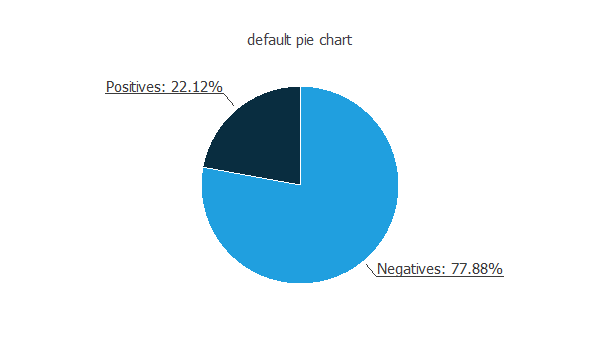 As we can observe, the data is unbalanced; this information will be used to configure the neural network later.

The next figure depicts the inputs-targets correlations of all the inputs with the target. This helps us to see the influence of the different inputs on the default. 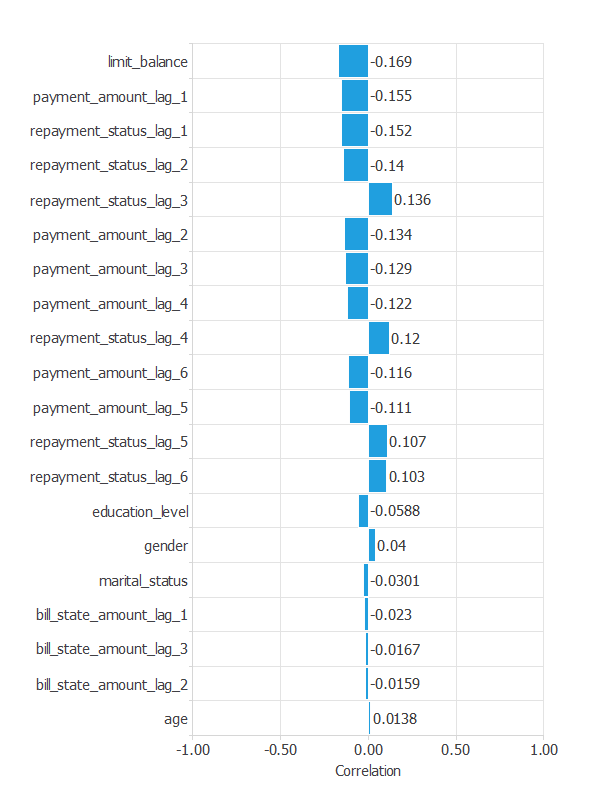 For the scaling layer, the mean and standard deviation scaling method is set.

We set 2 perceptron layers, one hidden layer with 3 neurons as a first guess and one output layer with 1 neuron, both layers having the logistic activation function.

The next figure is a diagram for the neural network used in this example. 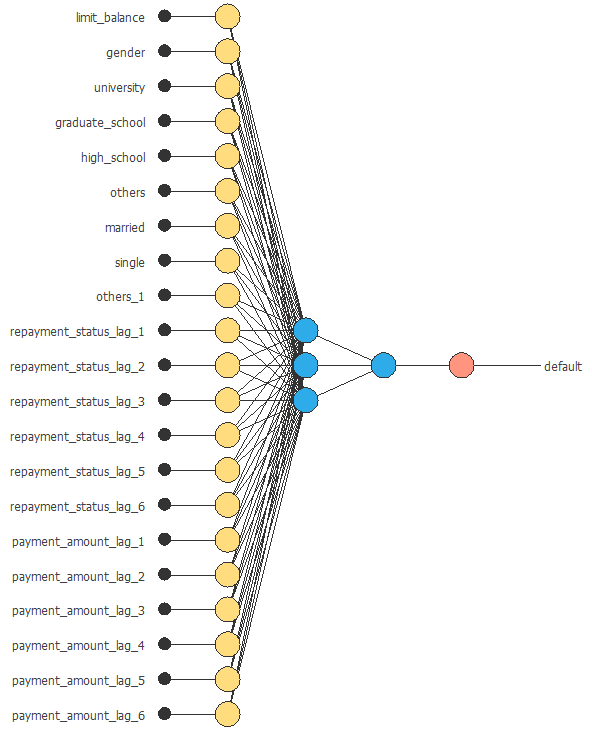 The fourth step is to configure the training strategy, which is composed of two concepts:

In this case, the neural parameters norm weight term is 0.01. This parameter makes the model to be stable, avoiding oscillations.

The optimization algorithm is applied to the neural network to get the best performance. The chosen algorithm here is the quasi-Newton method, and we leave the default parameters. 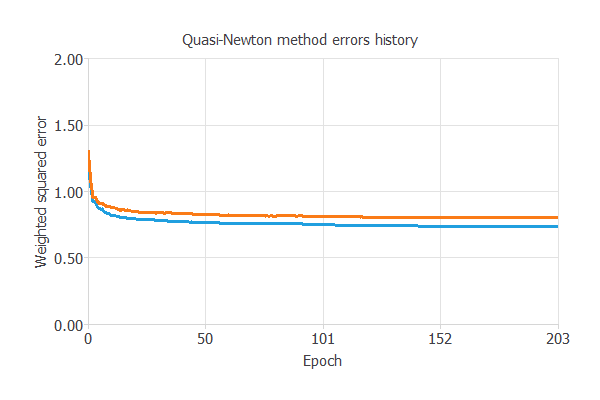 The objective of a model selection is to find the network architecture with the best generalization properties, that is, that which minimizes the error on the selected instances of the data set.

More specifically, we want to find a neural network with a selection error of less than 0.802 WSE, which is the value that we have achieved so far. 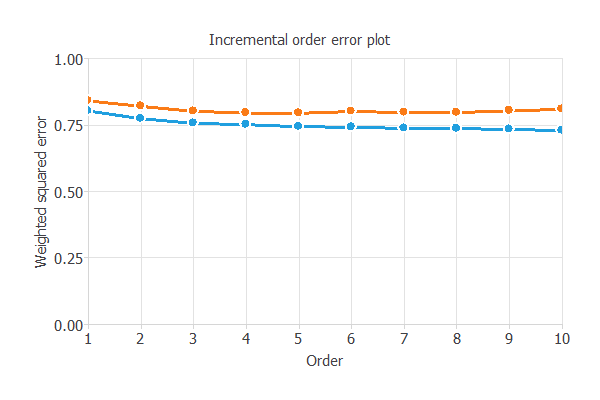 The final selection error achieved is 0.801 for an optimal number of neurons of 3. 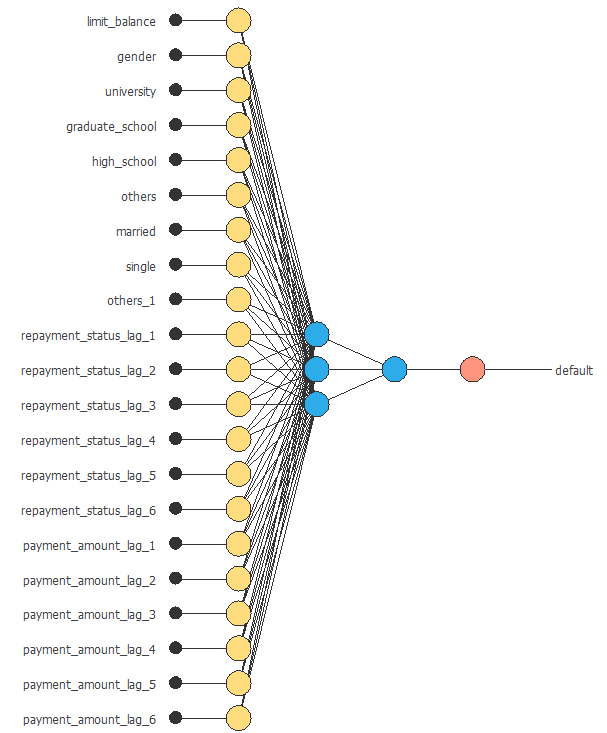 The graph above represents the architecture of the final neural network.

The next step is to evaluate the performance of the trained neural network by an exhaustive testing analysis. The standard way to do this is to compare the outputs of the neural network against data never seen before, the training instances.

A common method to measure the generalization performance is the ROC curve. This is a graphical aid to study the capacity of discrimination of the classifier. One of the parameters that can be obtained from this chart is the area under the curve (AUC). The closer to 1 area under the curve, the better the classifier. The next figure shows this measure for this example. 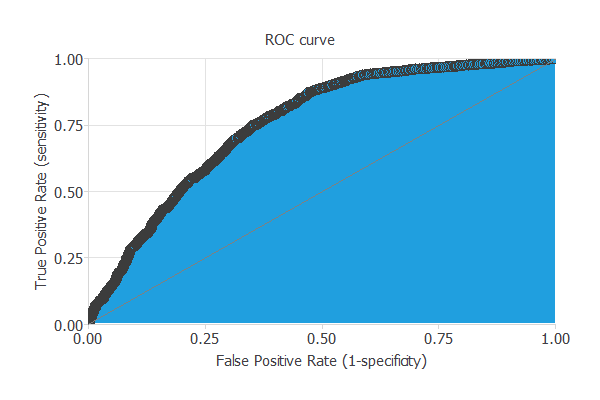 The binary classification tests and the confusion matrix give us very useful information about our predictive model's performance. Below, both of these are displayed.

The classification accuracy takes a high value (76.2%), which means that the prediction is good for a large number of cases.

We can also perform the cumulative gain analysis which is a visual aid that shows the advantage of using a predictive model as opposed to randomness. 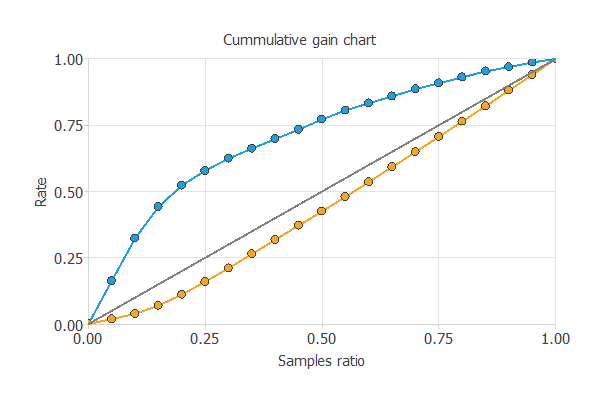 In this case, by using the model, we see that by analyzing 50% of the clients with the higher probability of default, we would reach more than 75% of clients that will have default payments.

Below, the mathematical expression for the present model is displayed.

This expression can be exported elsewhere, for example, a bank's software to implement the prediction of these values.