An insurance company has provided health insurance to its customers and now they want to predict whether the customers from past years will also be interested in a vehicle insurance provided by the company.

Customer targeting consists of identifying those persons that are more prone to a specific product or service. 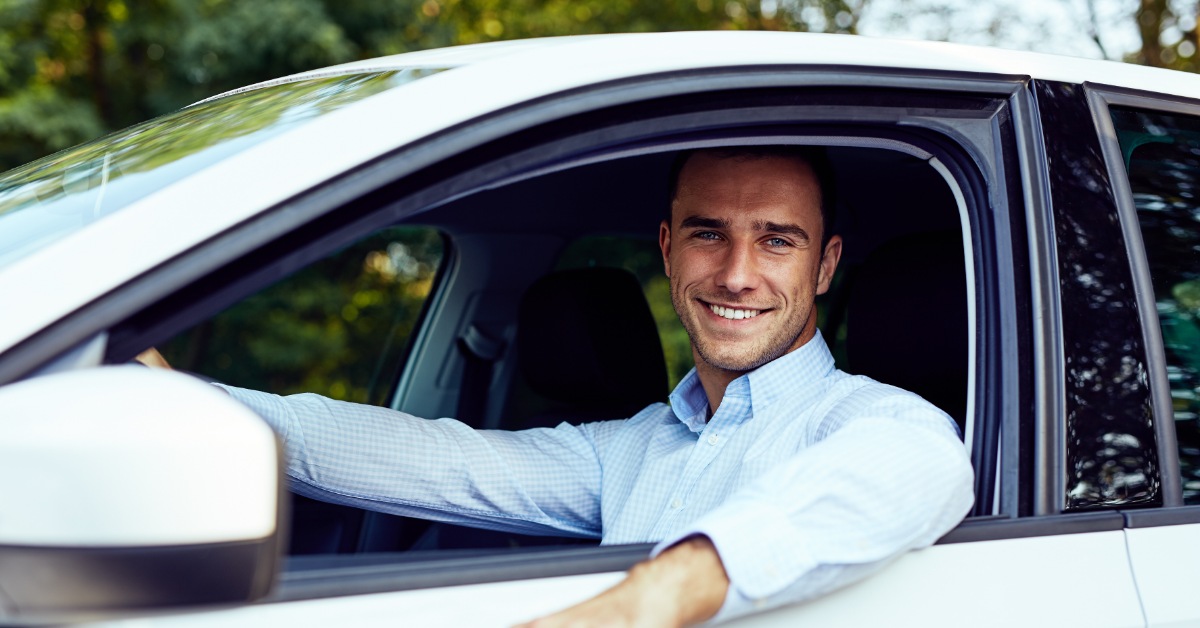 This example is solved with Neural Designer. In order to follow this example step by step, you can use the free trial.

The goal here is to create a model to obtain the probability of being interested as a function of customer features.

The data set contains information to create our model. We need to configure three things:

The data file used for this example is vehicle-insurances.csv, which contains 9 features about 381109 customers of the insurance company.

On the other hand, the instances are divided randomly into training, selection and testing subsets, containing 60%, 20% and 20% of the instances, respectively.

Our target variable is response. We can calculate the data distributions and plot a pie chart with the percentage of instances for each class. 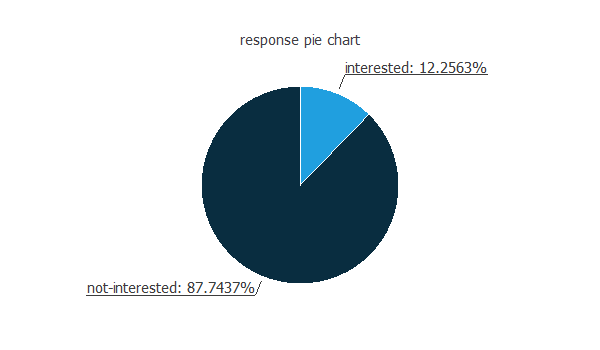 Furthermore, we can also compute the inputs-targets correlations, which might indicate which factors have the greatest influence on being interested on the vehicle insurance. 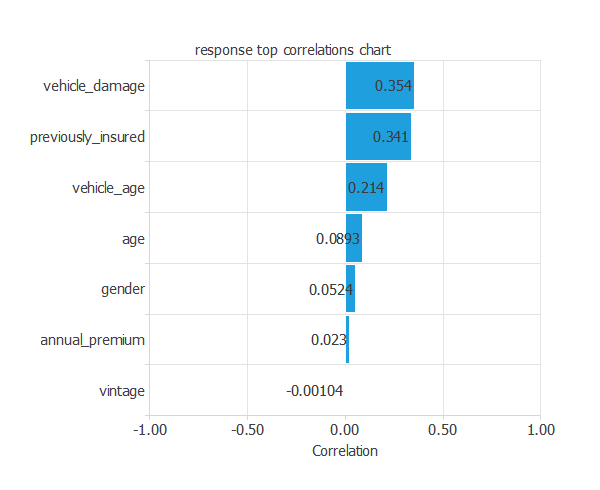 The next step is to set the neural network parameters. For classification problems, it is composed of:

For the scaling layer, the mean and standard deviation scaling method has been set.

We set one perceptron layer with 3 neurons having the logistic activation function. This layer has 7 inputs and since the target variable is binary, only one output.

The neural network for this example can be represented with the following diagram: 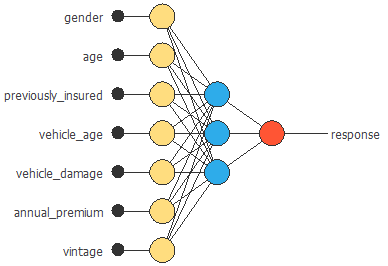 The loss index chosen for this problem is the normalized squared error between the outputs from the neural network and the targets in the data set with L1 regularization.

The selected optimization algorithm is the adaptative linear momentum. 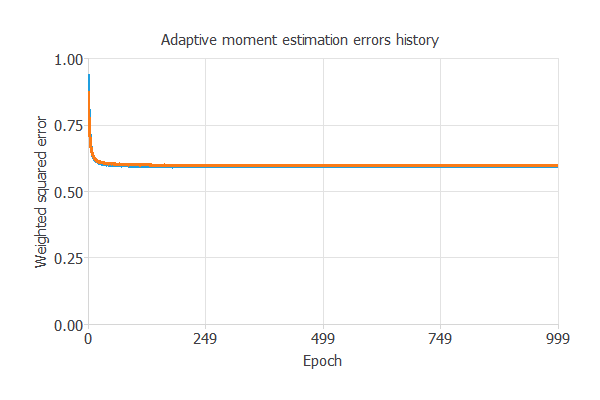 The objective of model selection is to find the network architecture with the best generalization properties, that means to find the one which minimizes the error on the selected instances of the data set.

More specifically, we want to find a neural network with a selection error of less than 0.598 NSE, which is the value that we have achieved so far.

Order selection algorithms train several network architectures with a different number of neurons and select the one with the smallest selection error.

The incremental order method starts with a small number of neurons and increases the complexity at each iteration.

The final selection error achieved is 0.5873 for an optimal number of neurons of 6. 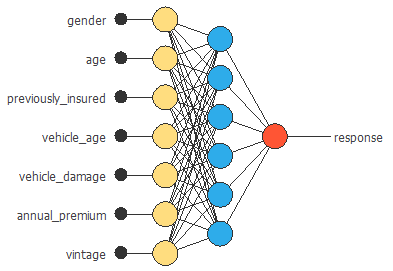 The graph above represents the architecture of the final neural network. 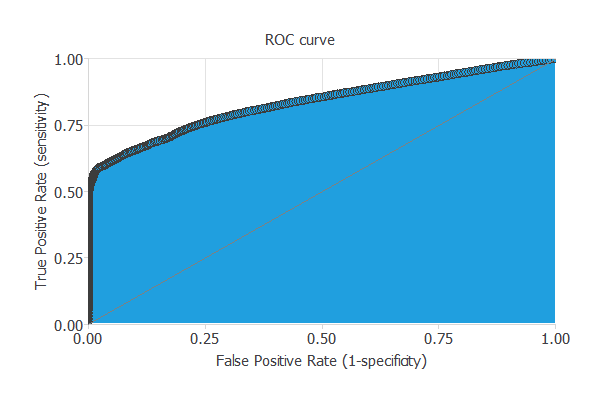 We can also observe this results in the positive rates chart:

The initial positive rate was around 12% and now, after applying our model, it is 25%. This means that with this model, we would be able to duplicate the vehicle insurance's sales.

We can also perform the cumulative gain analysis which is a visual aid that shows the advantage of using a predictive model as opposed to randomness. It consists of three lines. 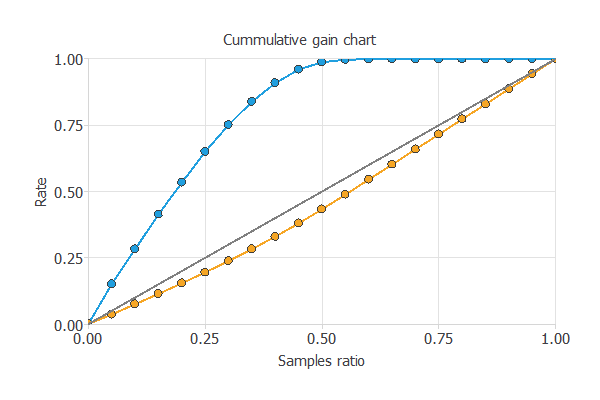 In this case, by using the model, we see that by analyzing 50% of the clients with the higher probability of being interested on the vehicle insurance, we would reach almost 100% of clients that would take out the insurance.

Another testing method is the profit chart. This testing method shows the difference in profits from randomness and those using the model depending on the instance ratio. 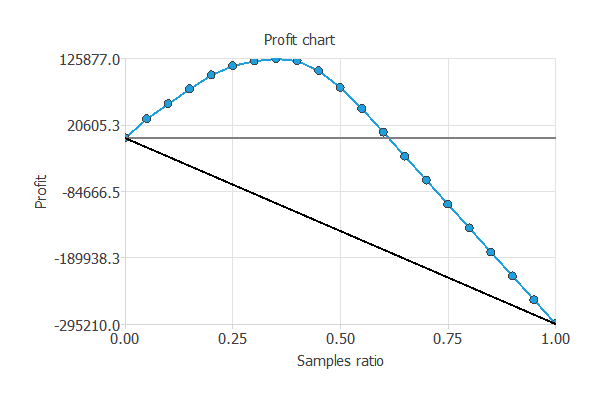 The values of the previous plot are displayed below:

In the graph we can observe that having an unitary cost of 10 USD and an unitary income of 50 USD, if we contact 35% of the customers that are most likely to be interested in the vehicle insurance, we would have the maximum benefict (125877 USD).

The model obtained after all the steps are not the best it could be achieved. Nevertheless, it is still better than guessing randomly.

The next listing shows the mathematical expression of the predictive model.

This formula can be also exported to the software tool required by the company.

You can watch the step by step tutorial video below to help you complete this Machine Learning example for free using the powerful machine learning software, Neural Designer.