Nowadays is very important to reduce CO2 emissions in the atmosphere in order to fight against the climate change. Indeed, many laws forbid cars whose CO2 emissions are above a certain limit; they must be below it to be approved to drive through the roads.

That is why this machine learning example is a topical issue that should raise awareness in the reader.

Performance optimization can be applied to understand the behavior of car engines and their CO2 emissions.

For this study we have gathered a large data set of different types of cars that could exist in any place of the world.

We will predict CO2 emissions with certain independent variables. Any car company could adjust this value by simply modifying different parameters like the size of the engine and many other engines' features. 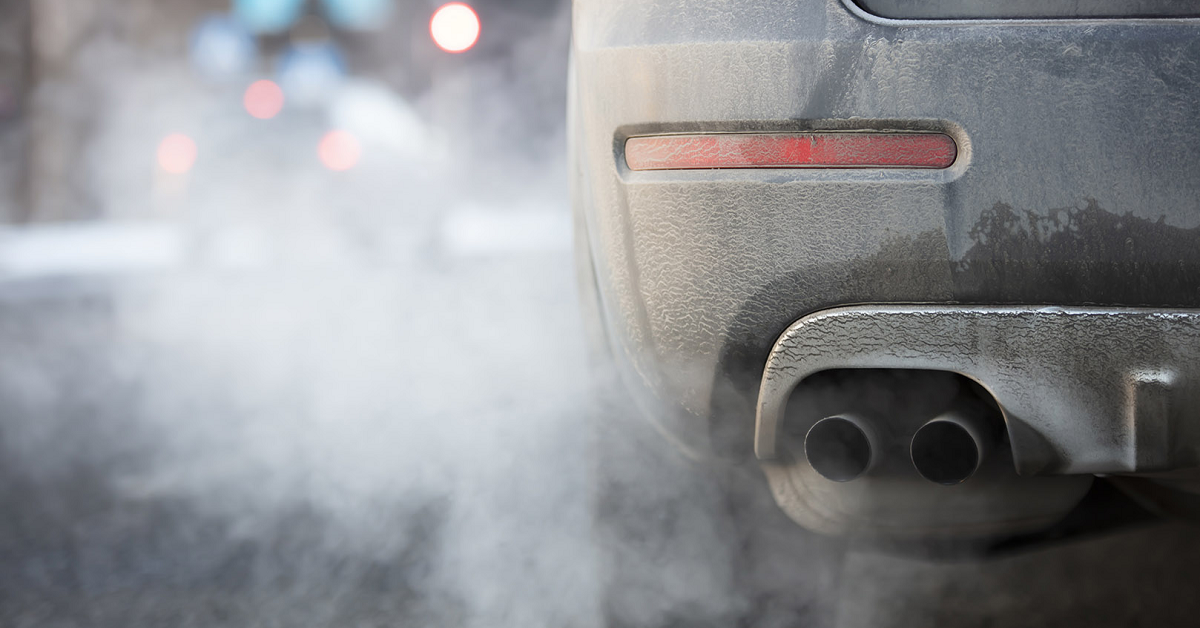 This is an approximation project since the variable to be predicted is continuous (CO2 emissions).

The fundamental goal here is to model the CO2 emissions as a function of several car engines features.

The file co2_emissions.csv contains the data for this example. Here the number of variables (columns) is 12, and the number of instances (rows) is 7385.

In that way, this problem has the 12 following variables:

All the variables that appear on the study are inputs, except for 'make' and 'model' that have to stay as "unused", and 'co2_emissions' which is the output that we want to extract from this machine learning study.

Also we realized that the instance 'vehicle_class' could be a bit problematic to analyze because it contains a lot of categorical variables inside, but in a further study we can see that the final selection error is higher without this variable than including it. As one of the main goals of a Neural Network study is to minimize as much as possible the Selection Error, we can add 'vehicle_class' as an input.

As we can see, there are certain variables that should stay as "unused" too. That is the case of 'fuel_consumption' (in city, highway or combined). These instances could be targets of the study (CO2 and fuel consumption are dependent on each other), but it is more visual to see the CO2 emissions as the final output.

They are divided at random into training, selection, and testing subsets, containing 60%, 20%, and 20% of the instances, respectively. More specifically, 4431 samples are used here for training, 1477 for validation, and 1477 for testing. 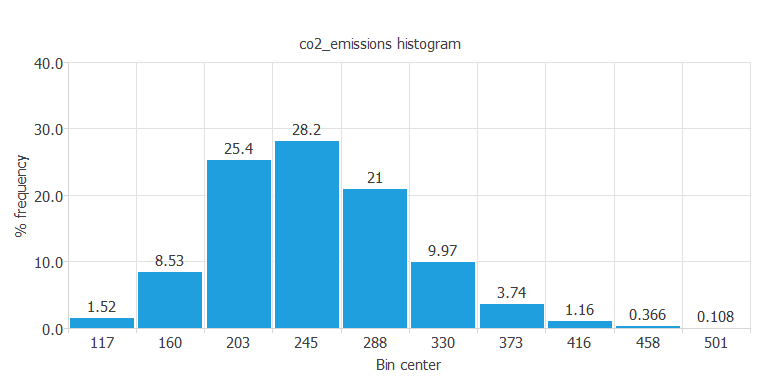 The next figure depicts inputs-targets correlations. This might help us to see the influence of the different inputs on the final car emissions. 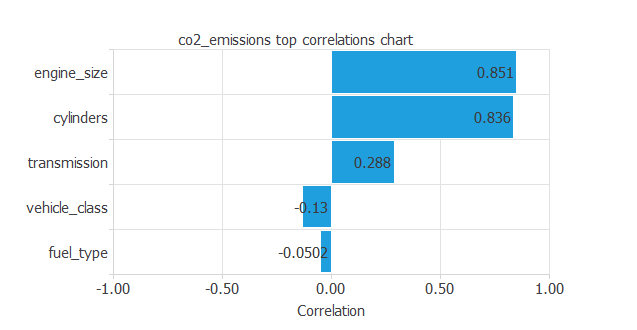 We can also plot a scatter chart with the CO2 emissions versus the engine size. 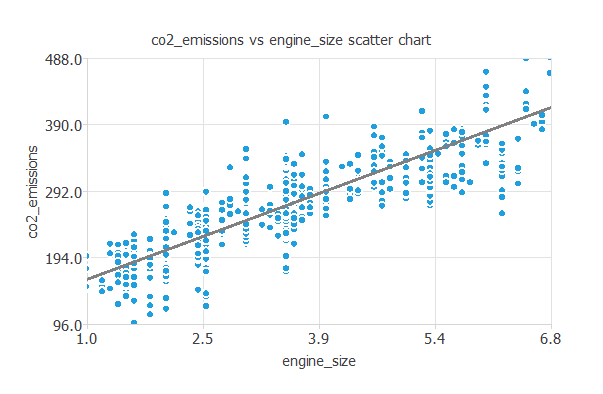 In general, the more engine size, the more emissions. However, CO2 emissions depend on all the inputs at the same time.

The neural network will output the CO2 emissions as a function of consumption, transmission and other car engine features.

Here two perceptron layers are added to the neural network. This number of layers is enough for most applications. The first layer has 28 inputs and 3 neurons. The second layer has 3 inputs and 1 neuron. 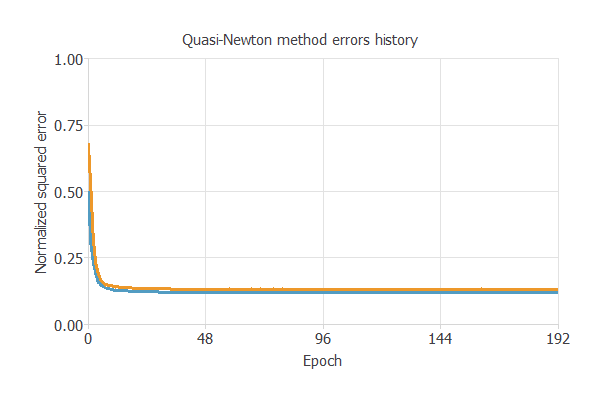 The objective of model selection is to find the network architecture with the best generalization properties. That is, we want to improve the final selection error obtained before (0.145 NSE). 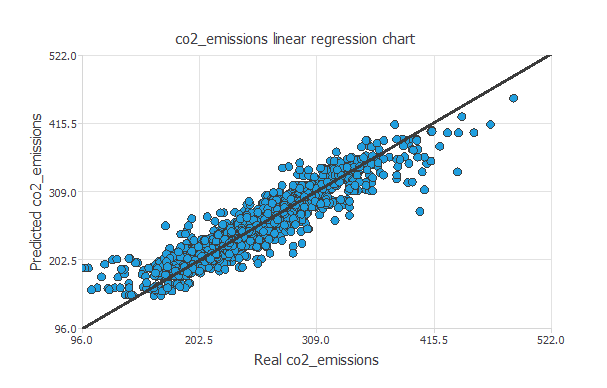 From the above chart, we can see that the neural network is predicting well the entire range of the CO2 emissions data. The correlation value is R2 = 0.924, which is very close to 1.

The model is now ready to estimate the CO2 emissions of a certain car with satisfactory quality over the same data range.

We can plot a directional output of the neural network to see how the emissions vary with a given input, for all other inputs fixed. The next plot shows the CO2 emissions as a function of the number of cylinders, through the following point: 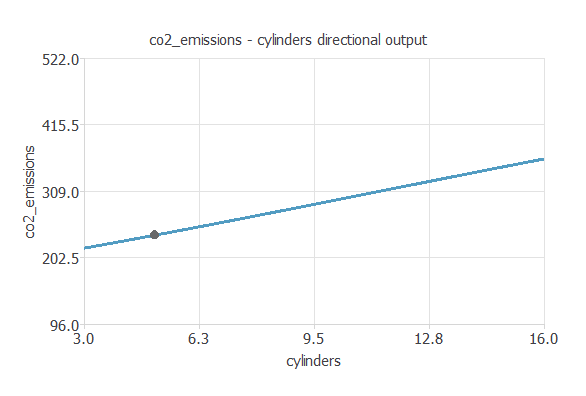 The co2-emissions.py contains the Python code for the CO2 emissions.