A Chinese automobile company aspires to enter the US market by setting up their manufacturing unit there and producing cars locally to give competition to their US and European counterparts.

They want to understand the factors affecting the pricing of cars in the American market, since those may be very different from the Chinese market. The company wants to know which variables are significant in predicting the price of a car and how well those variables describe the price based on various market surveys.

Performance optimization can be applied to understand the behavior of the american car market.

For this study we have gathered a large data set of different types of cars across de american market.

We are required to model the price of cars with the available independent variables. It will be used by the company management to understand how exactly the prices vary with the independent variables. They can accordingly manipulate the design of the cars, the business strategy etc. to meet certain price levels. Further, the model will be a good way for management to understand the pricing dynamics of a new market. 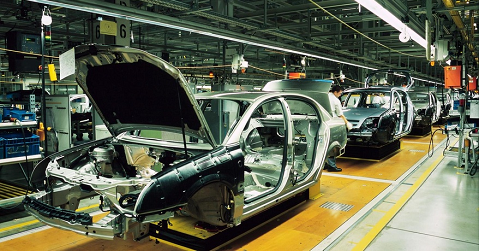 This is an approximation project since the variable to be predicted is continuous (car price).

The fundamental goal here is to model the pricing of cars as a function of several car features and different types of engines.

The file car_price_assignment.csv contains the data for this example. Here the number of variables (columns) is 26, and the number of instances (rows) is 205.

In that way, this problem has the 25 following variables:

All the variables that appear on the study are inputs, except for 'fuel_system', 'car_brand' and 'car_name' that have to stay as "unused", and 'price' which is the output that we want to extract from this machine learning study. Moreover, we realize that Neural Designer left the first variable 'car_id' out of the total number of variables because it does not have an useful value to this study.

They are divided randomly into training, selection, and testing subsets, containing 60%, 20%, and 20% of the instances, respectively. More specifically, 123 samples are used here for training, 41 for validation, and 41 for testing.

As we can see in the diagram, the car price has a normal distribution, because what we excpect is the american customers to buy cars at a low-medium range of prices, and only a few percent of the american population is able to buy expensive cars as the median personal income of the americans is not extremely high.

The next figure depicts inputs-targets correlations. This might help us to see the influence of the different inputs on the final price.

We realized that there are certain instances that have a very low correlation with our final target, in order to show more conclusive results we can exclude some of that variables of the study by clicking on 'Unuse uncorrelated variables' on the Task Manager window, and inserting a minimum correlation value of 0.01 (which is the lower value we can write), for example. 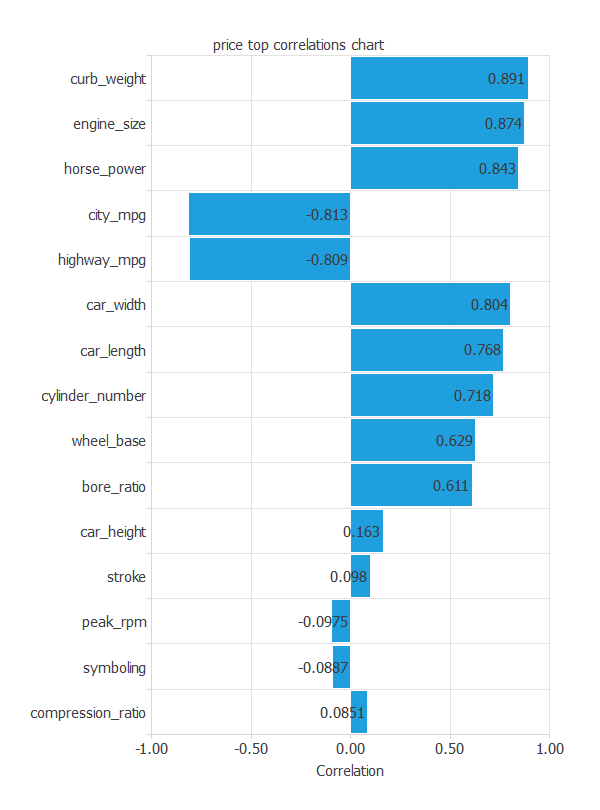 The above chart shows that a few instances have an important dependency on the car price. As we can see, curb weight, engine size and horse power affect positively to the price; that means the bigger the engine size, the more expensive the car is, for example. On the other hand there are instances (city and highway miles per gallon consumption) that have an important negative dependency on the price, the less the car consumes, the higher the price is.

We can also plot a scatter chart with the price versus the horse power. 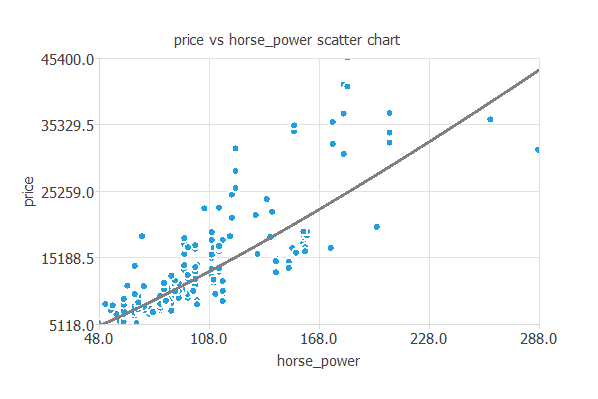 In general, the more horse power, the more price. However, the price depends on all the inputs at the same time.

The neural network will output the closing price as a function of all the different car features shown previously.

Here two perceptron layers are added to the neural network. This number of layers is enough for most applications. The first layer has 15 inputs and 3 neurons. The second layer has 3 inputs and 1 neuron. 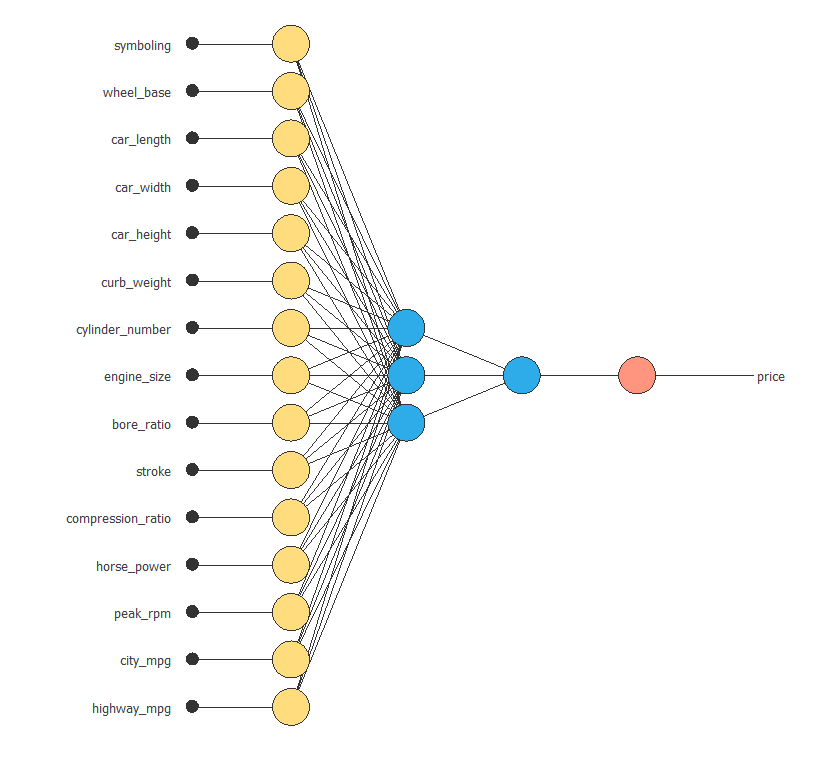 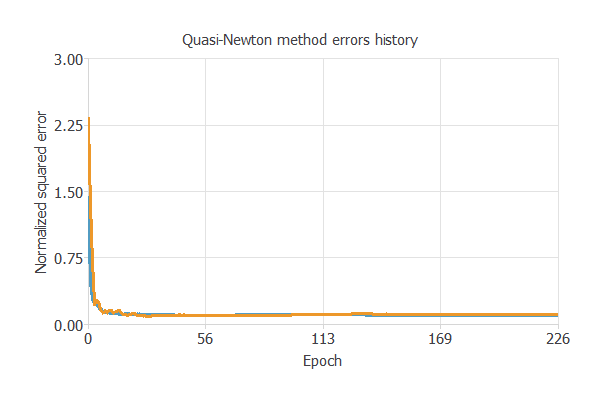 The objective of model selection is to find the network architecture with the best generalization properties. That is, we want to improve the final selection error obtained before (0.209 NSE). 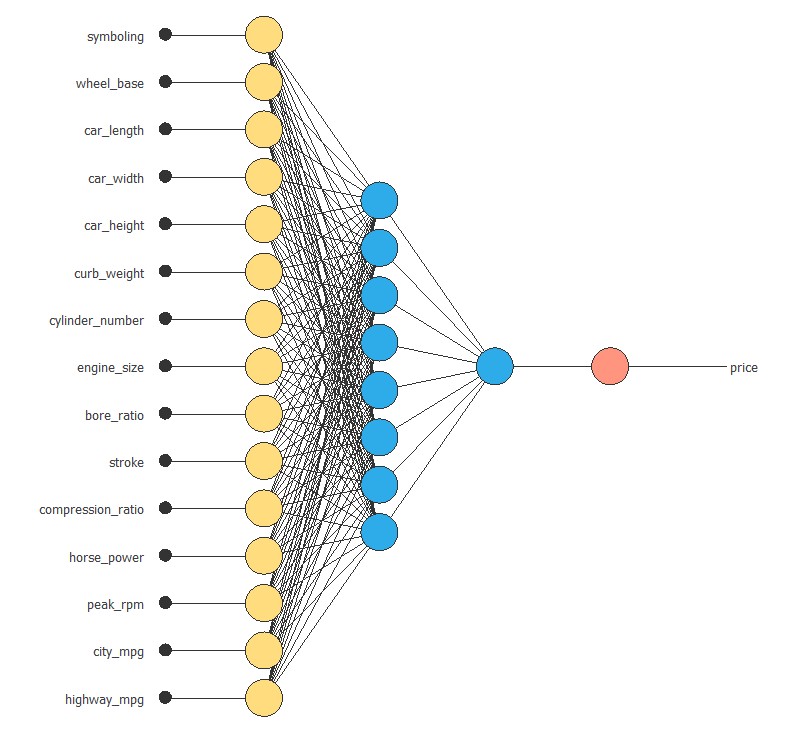 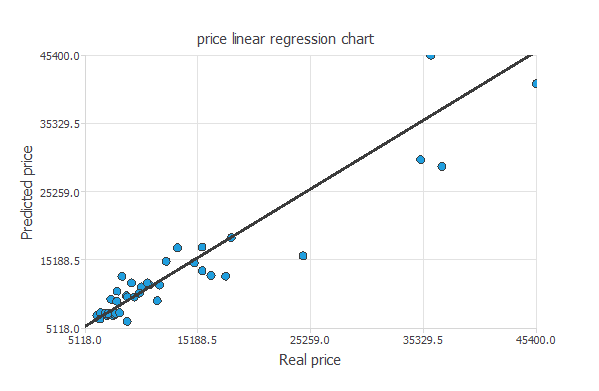 From the above chart, we can see that the neural network is predicting well the entire range of car prices data. The correlation value is R2 = 0.937, which indicates that the model has a reliable prediction capability.

The model is now ready to estimate the price of a certain car with satisfactory quality over the same data range.

We can plot a directional output of the neural network to see how the price varies with a given input, for all other inputs fixed. The next plot shows the car price as a function of the engine size, through the following point: 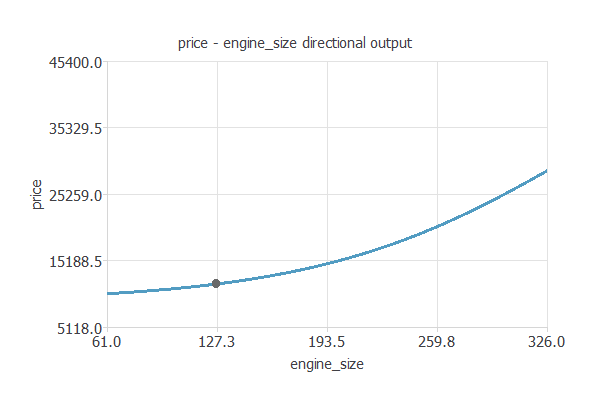 The car_price.py contains the Python code for the car price.