Superconductivity has been the focus of enormous research effort since its discovery more than a century ago.

Yet, some features of this unique phenomenon remain poorly understood; prime among these is the connection between superconductivity and chemical/structural properties of materials.

To bridge the gap, several machine learning schemes are developed herein to model the critical temperatures (Tc) of superconductors

Performance optimization can be applied to understand the curious behavior of these materials.

For this study we have gathered a large data set of the chemical properties of 21263 superconductors.

We will predict the critical temperature of superconductors with different independent variables. 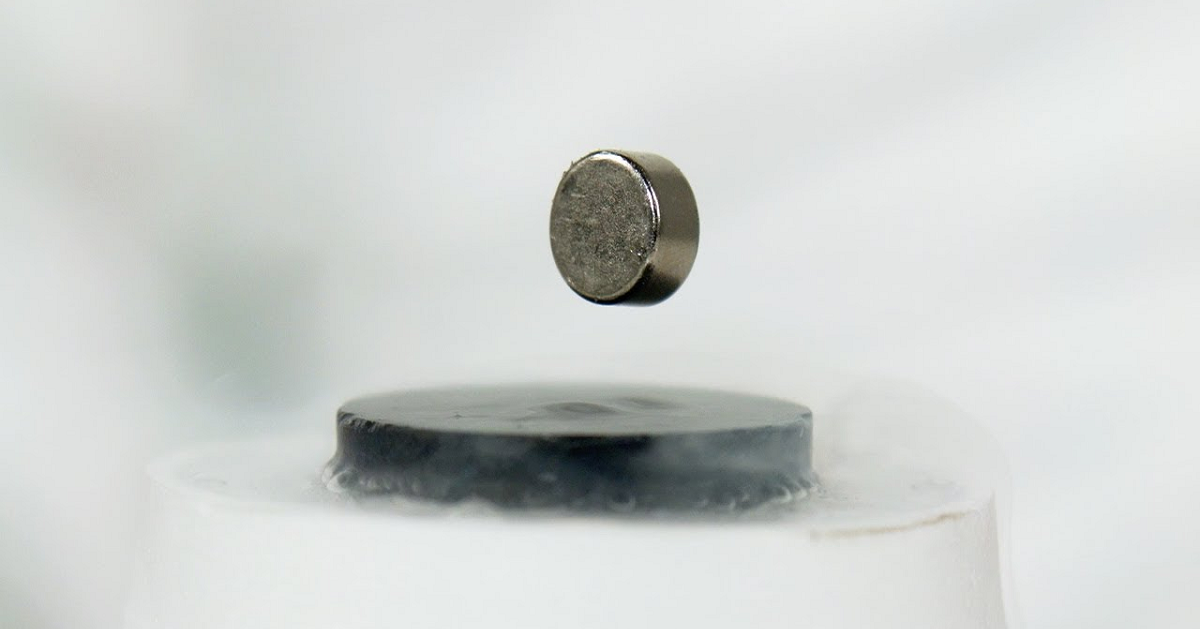 This is an approximation project since the variable to be predicted is continuous (Critical Temperature).

In this study, we take an entirely data-driven approach to create a statistical model that predicts Tc based on its chemical formula.

The file superconductor.csv contains the data for this example. Here the number of variables (columns) is 82, and the number of instances (rows) is 21263.

These are the main variables of this study. They correspond to chemical properties of each compound in the following dataset; chemical_compounds.csv.

The ratios of the elements in the material are used to define features:

Where \( j \) is the proportion of an element in the compound

The fractions of total thermal conductivities are used as well:

Where \( t_{i} \) are the thermal conductivity coefficients.

We will also need intermediate values for calculating features:

The next table sumarizes the procedure for feature extraction from material's chemical formula.

We can calculate features like the weighted geometric mean and obtain a value of \( 43.21 \)

They are divided at random into training, selection, and testing subsets, containing 60%, 20%, and 20% of the instances, respectively. More specifically, 12759 samples are used here for training, 4252 for validation, and 4252 for testing. 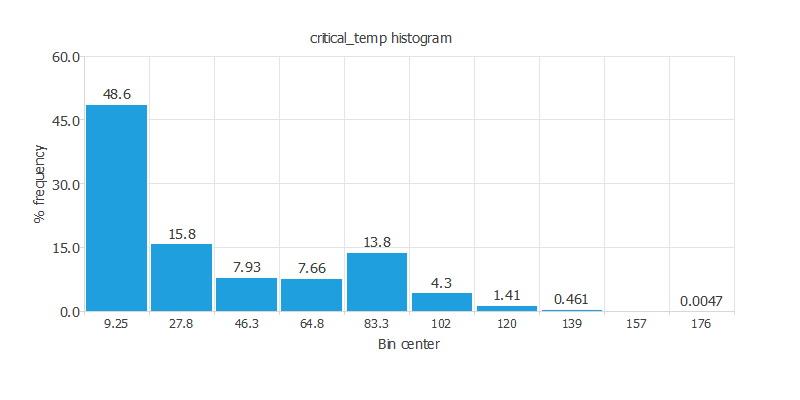 As we can see in the graph plotted, there are more chemical compounds with low critical temperature.

The next figure depicts inputs-targets correlations. This might help us to see the influence of the different inputs on the critical temperature. 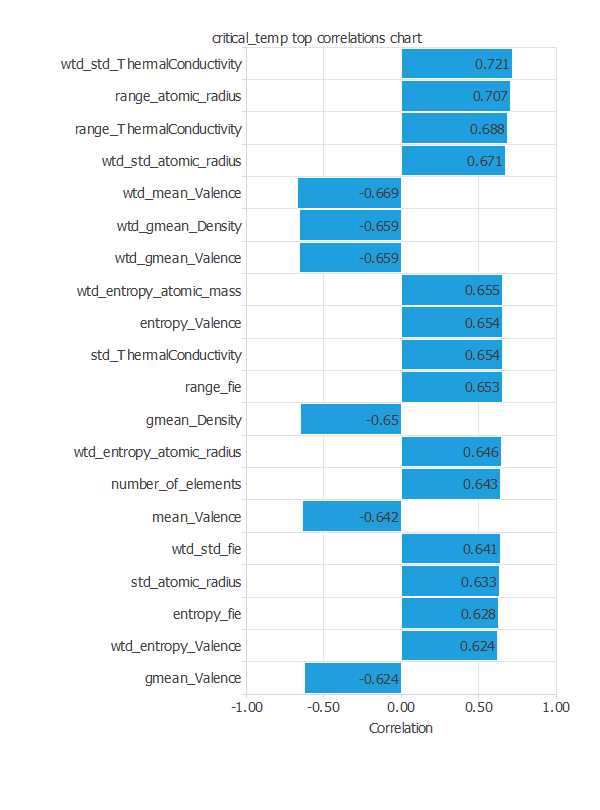 As there are so many input variables, the chart shows the top 20.

We can also plot a scatter chart with the critical temperature versus the weighted mean valence. 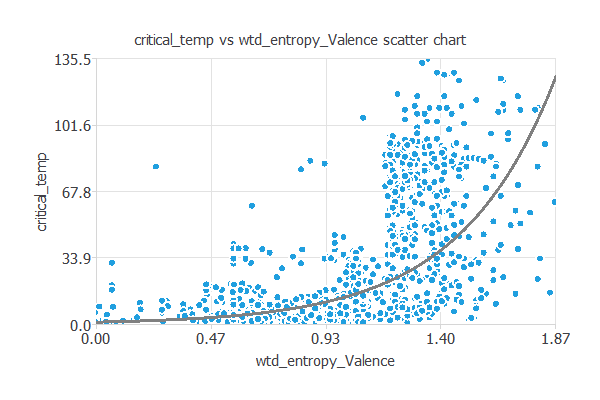 As we can see, the critical temperature decreases when we increase the weighted mean valence logarithmicly.

The neural network will output the critical temperature as a function of different chemical properties.

The scaling layer transforms the original inputs to normalized values. Here the Minimum-Maximum deviation scaling method is set so that the input values have minimum of -1 and maximum of +1.

Here two perceptron layers are added to the neural network. This number of layers is enough for most applications. The first layer has 81 inputs and 3 neurons. The second layer has 3 inputs and 1 neuron.

The unscaling layer transforms the normalized values from the neural network into the original outputs. Here the Minimum-Maximum deviation scaling method mean and standard deviation unscaling method will also be used. 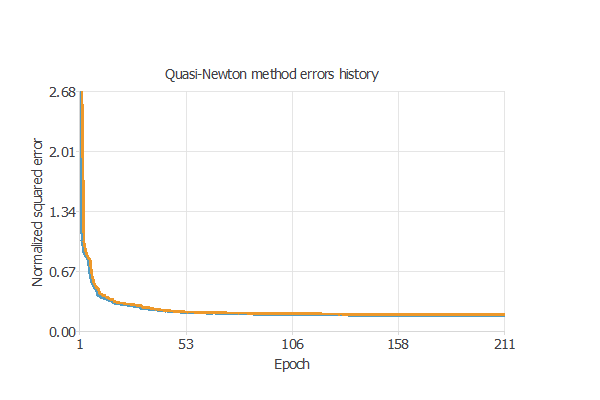 The objective of model selection is to find the network architecture with the best generalization properties. That is, we want to improve the final selection error obtained before (0.178 NSE). 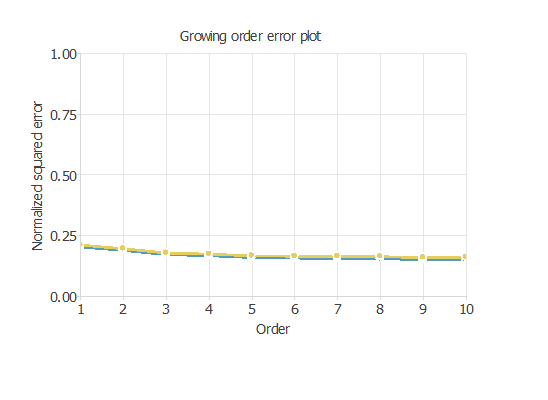 The above chart shows the error history for the different subsets during the growing neurons selection process. The blue line represents the training error and the yellow line symbolizes the selection error. 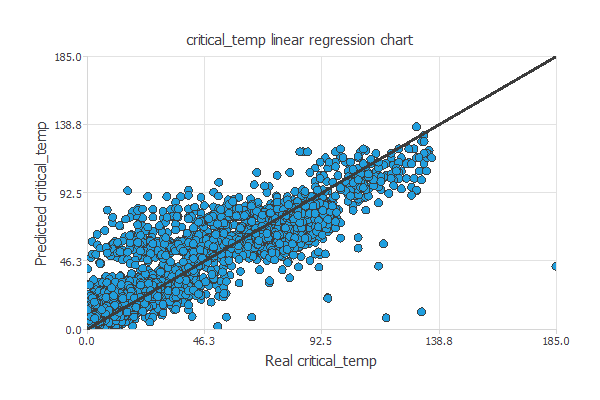 From the above chart, we can see that the neural network is predicting well the entire range of the critical temperature data. The correlation value is R2 = 0.911, which is very close to 1.

The model is now ready to estimate the critical temperature of a certain chemical compound.

We can plot a directional output of the neural network to see how the emissions vary with a given input, for all other inputs fixed. The next plot shows the critical temperature as a function of the geometric mean valence, through the following point: 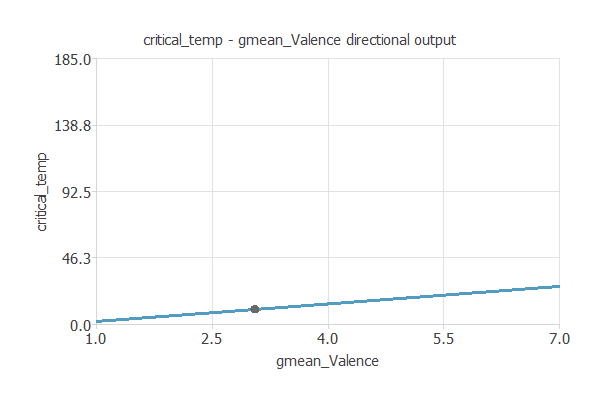 For this study is important to mention other useful task of the Model Deployment Tool, we are referring to: Calculate Outputs.

We could think about creating a semiconductor with specific chemical quantities, with this tool we will be able to select especially the inputs and calculate the optimal superconductor critical temperature for the purpose we want.

The superconductor.py contains the Python code to calculate a compound critical temperature.