Customer churn is a big problem for telecommunications companies. Indeed, their annual churn rates are usually higher than 10%.

For that reason, they develop strategies to keep as many clients as possible.

This example aims to use machine learning to predict which customers will leave the company, take measures, and prevent it. 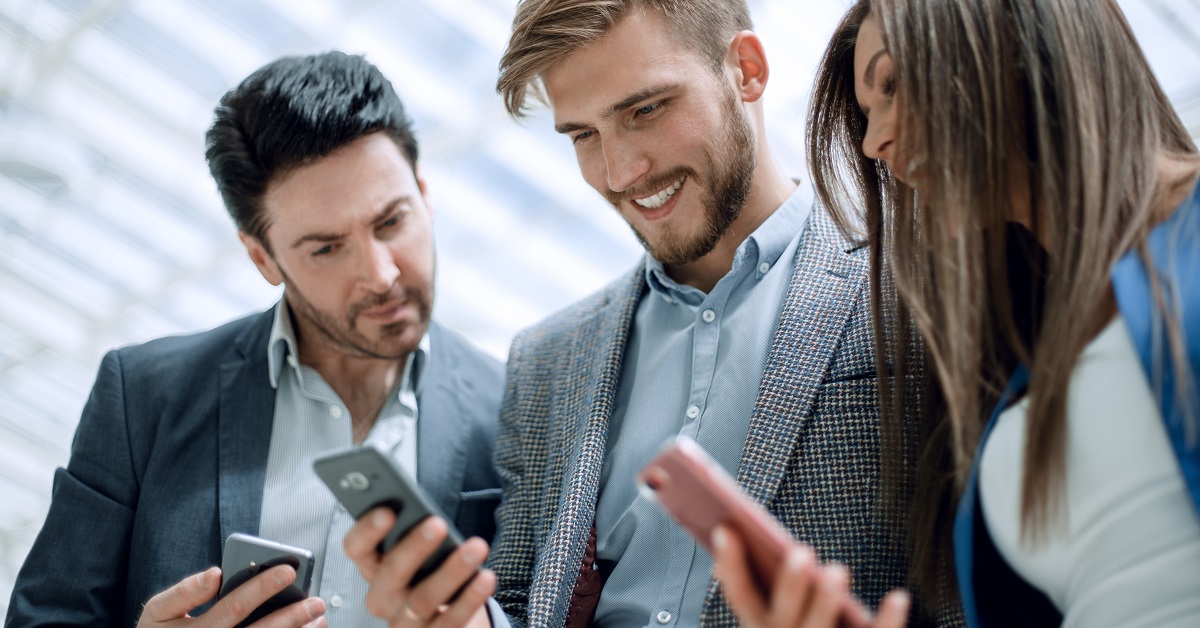 This is a classification project since the variable to be predicted is binary (churn or loyal customer).

The goal here is to model the probability of churn, conditioned on the customer features.

The data file telecommunications_churn.csv contains a total of 19 features for 3333 customers. Each row corresponds to a client of a telecommunications company for whom it has been collected information about the type of plan they have contracted, the minutes that they have talked, or the charge they pay every month.

The first step of this analysis is to check the distributions of the variables. The next figure shows a pie chart of churn and loyal customers. 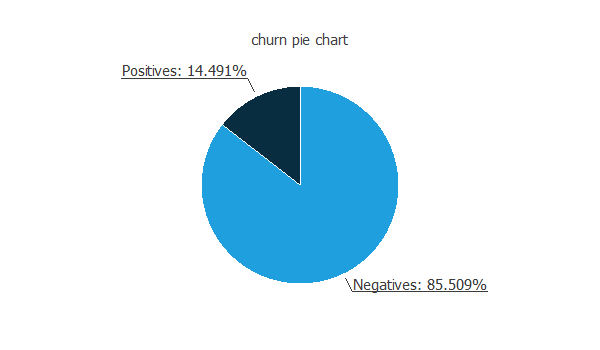 As we can see, the annual churn rate in this company is almost 15%. Also, we observe that the dataset is unbalanced.

The inputs-targets correlations might indicate to us what factors are most influential for the churn of customers. 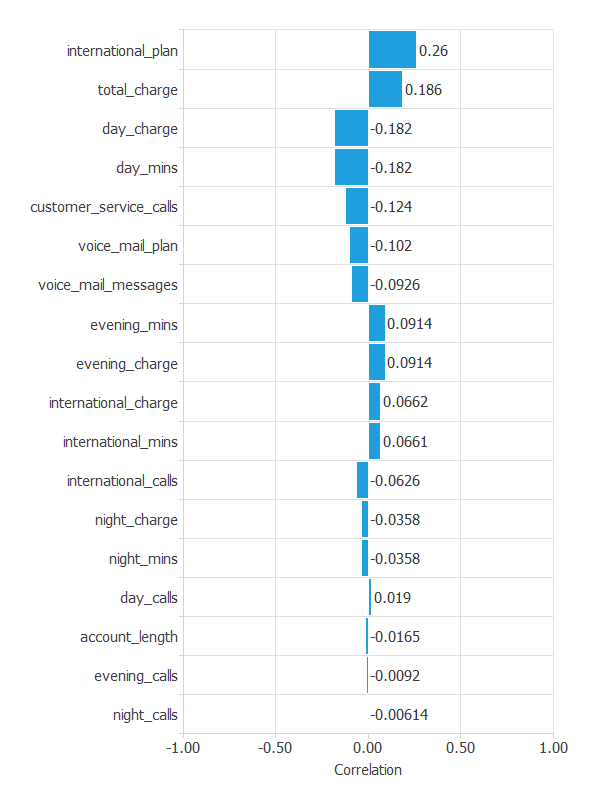 Here, the most correlated variable with churn is international_plan. A positive correlation here means that a high ratio of customers with an international plan is leaving the company.

For the scaling layer, the mean and standard deviation scaling method is set.

We set 2 perceptron layers, one hidden layer with 3 neurons as a first guess and one output layer with 1 neuron, both layers having the logistic activation function.

The architecture shown below consists of 18 scaling neurons (yellow), 5 neurons in the first layer (blue), and 1 probabilistic neuron (red). 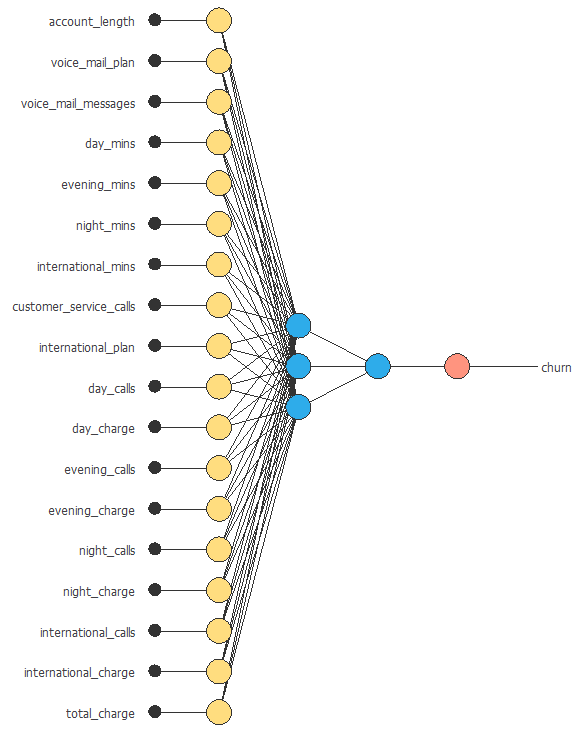 As we saw before, the data set is unbalanced. In that way, we set the weighted squared error

The next chart shows how the loss decreases during the training process with the iterations of the Quasi-Newton method. 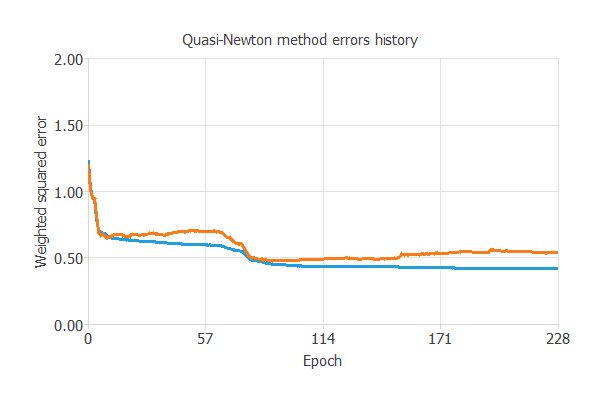 The objective of model selection is to find the network architecture with the best generalization properties, that is, that which minimizes the error on the selected instances of the data set.

More specifically, we want to find a neural network with a selection error of less than 0.455 WSE, which is the value that we have achieved so far. 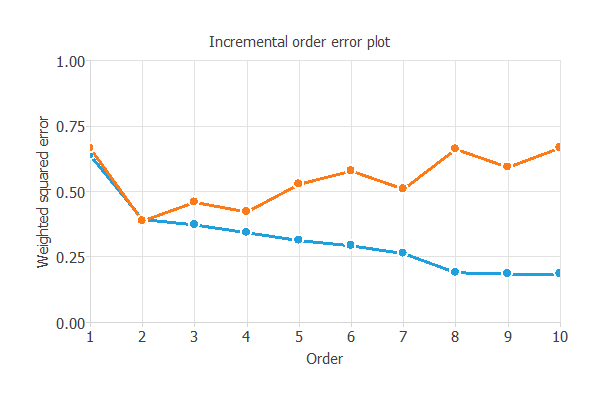 As we can see, the optimal number of perceptrons in the first layer is optimal order = 2, and the optimum error on the selected instances is selection error = 0.455 WSE. 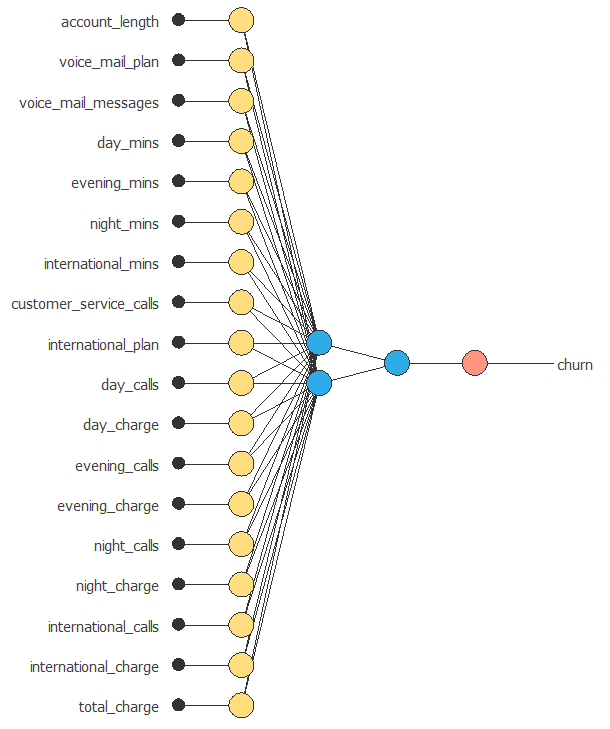 The purpose of the testing analysis is to evaluate the performance of the trained model on new data that have been used neither for training nor for selection. For that, we use the testing instances.

The ROC curve measures the discrimination capacity of the classifier between positives and negatives instances. The next chart shows the ROC curve of our problem. 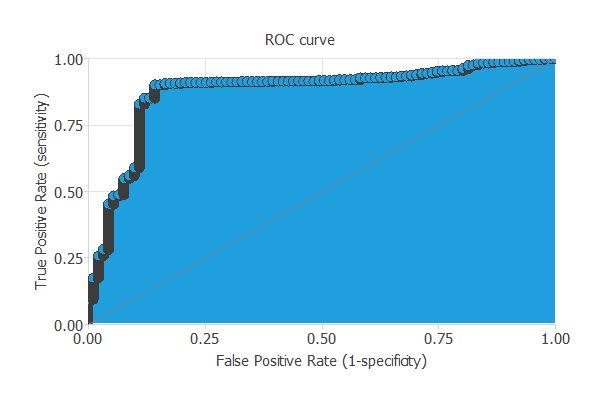 The proximity of the curve to the upper left corner means that the model has a good capacity to discriminate between the two classes.

The most important parameter from the ROC curve is the area under the curve (AUC). This value is 0.5 for a random classifier and 1 for a perfect classifier. For this example, we have AUC = 0.896, which means that the model is predicting well the churn of our customers.

The binary classification tests are calculated from the values of the confusion matrix.

These binary classification tests show that the model can predict most of the instances correctly.

Once the generalization performance of the neural network has been tested, it can be saved for future use in the so-called model deployment mode.

We can export the mathematical expression of the neural network to any bank software used for this purpose. This expression is listed below.