The noise generated by an aircraft is an efficient and environmental matter for the aerospace industry.

A vital component of the total airframe noise is the airfoil self-noise, which is due to the interaction between an airfoil blade and the turbulence produced in its boundary layer and near wake.

Performance optimization can be applied to understand the behavior of airfoils and make designs with reduced noise.

NASA processed the self-noise data set used in this example. It was obtained from a series of aerodynamic and acoustic tests of two and three-dimensional airfoil blade sections conducted in an anechoic wind tunnel.

The NASA data set comprises different NACA 0012 airfoils at various wind tunnel speeds and angles of attack. The span of the airfoil and the observer position was the same in all of the experiments. 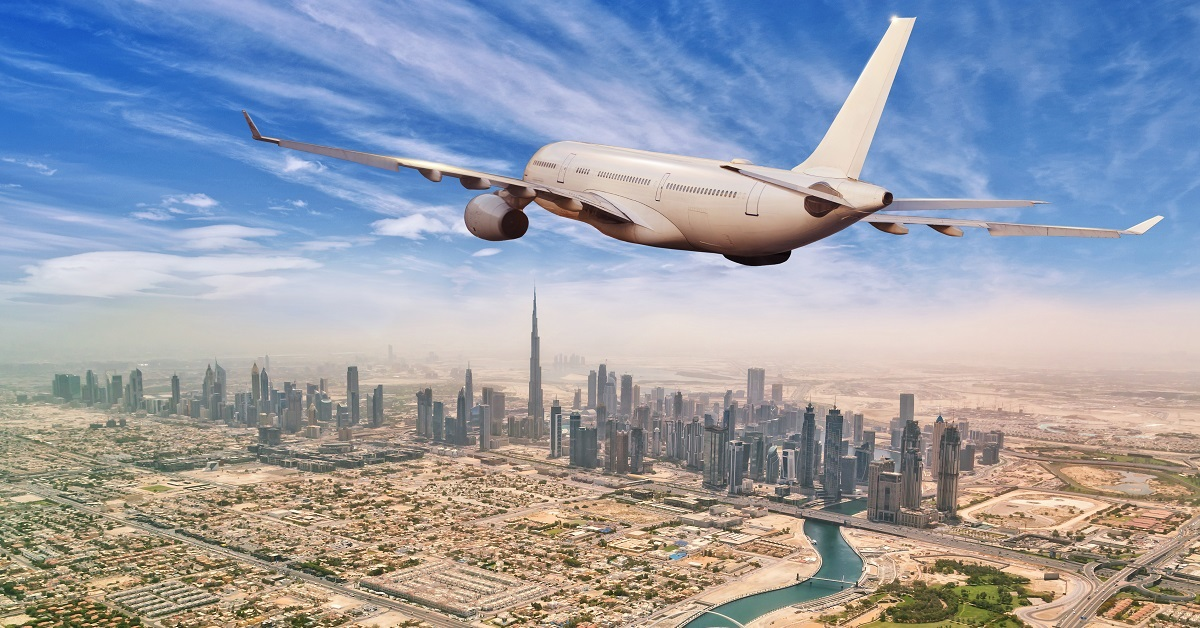 The variable to be predicted is continuous (sound pressure level). Therefore, this is an approximation project.

The fundamental goal is to model the sound pressure level as a function of the airfoil features and airspeed.

The file airfoil_self_noise.csv contains the data for this example. Here the number of variables (columns) is 6, and the number of instances (rows) is 1503.

In that way, this problem has the 6 following variables:

On the other hand, the NASA data set contains 1503 instances. They are divided at random into training, selection, and testing subsets, containing 60%, 20%, and 20% of the instances, respectively. More specifically, 753 samples are used here for training, 375 for validation, and 375 for testing. 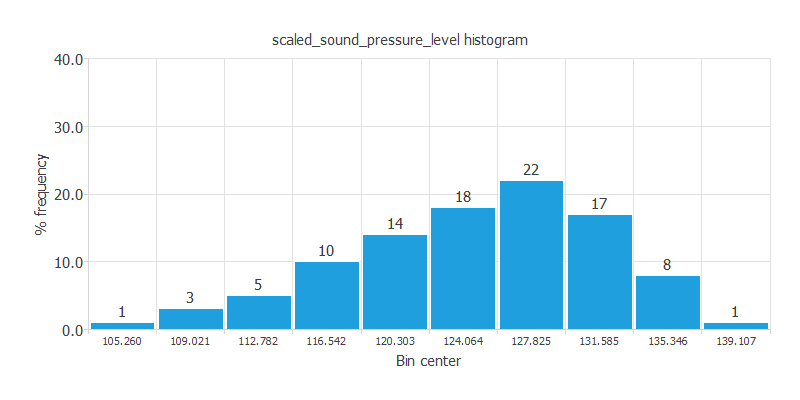 As we can see, the scaled sound pressure level has a normal distribution.

The next figure depicts inputs-targets correlations. This might help us to see the influence of the different inputs on the sound level. As we can see, the frequency of the wave has the most significant impact on the noise. 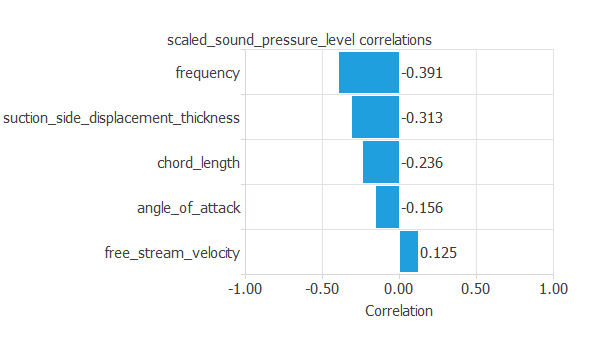 The above chart shows that the frequency of the wave has the most significant impact on the noise.

We can also plot a scatter chart with the scaled sound pressure level versus the frequency. 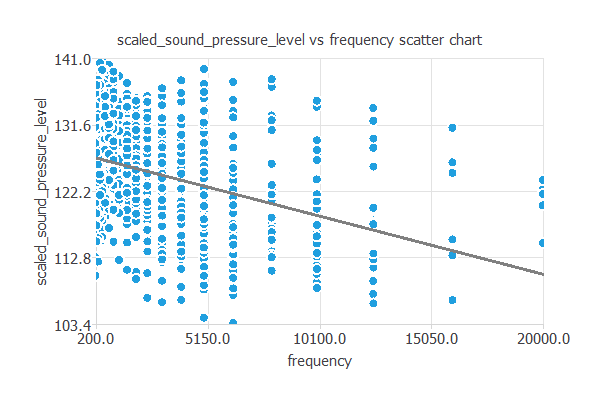 The neural network will output the scaled sound pressure level as a function of the frequency, angle of attack, chord length, free stream velocity, and suction side displacement thickness.

Here two perceptron layers are added to the neural network. This number of layers is enough for most applications. The first layer has five inputs and three neurons. The second layer has three inputs and one neuron. 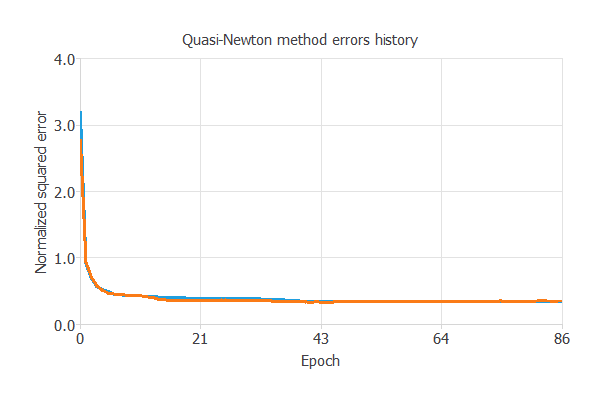 The objective of model selection is to find the network architecture with the best generalization properties. That is, we want to improve the final selection error obtained before (0.112 NSE).

The best selection error is achieved by using a model whose complexity is the most appropriate to produce an adequate data fit. Order selection algorithms are responsible for find the optimal number of perceptrons in the neural network. 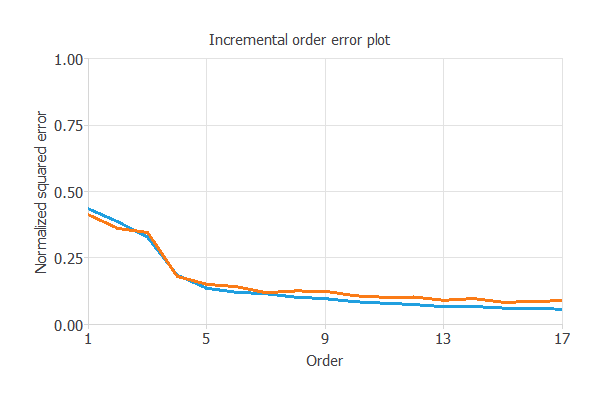 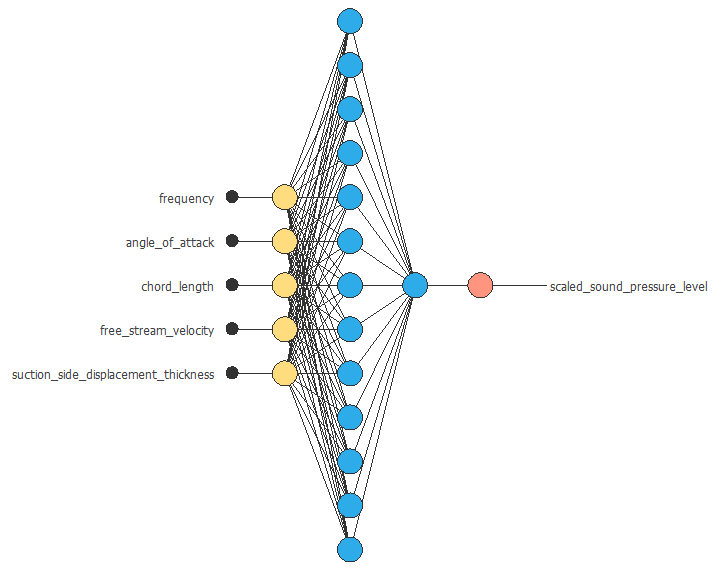 A standard testing technique in approximation problems is to perform a linear regression analysis between the predicted and the real values, using an independent testing set. The following figure illustrates a graphical output provided by this testing analysis. 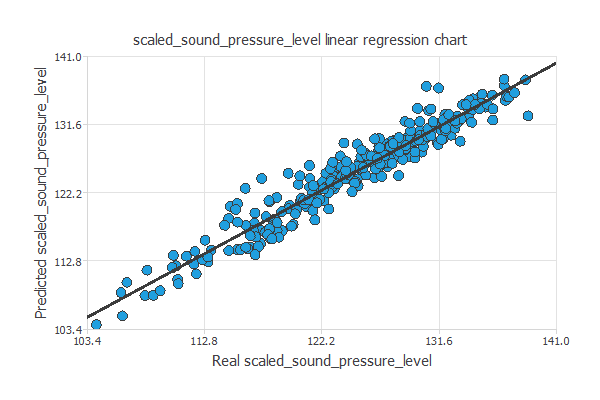 From the above chart, we can see that the neural network is predicting well the entire range of sound level data. The correlation value is R2 = 0.952, which is very close to 1.

The model is now ready to estimate the self-noise of new airfoils with satisfactory quality over the same data range.

We can plot a directional output of the neural network to see how the sound level varies with a given input for all other inputs fixed. The next plot shows the sound level as a function of the frequency through the following point: 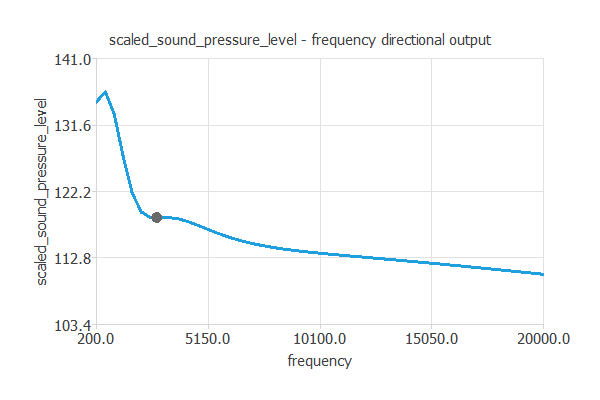 The file airfoil_self_noise.py contains the Python code for the scaled sound pressure level.

You can watch the step-by-step tutorial video below to help you complete this Machine Learning example for free using the easy-to-use machine learning software Neural Designer.