This example aims to design a model that can diagnose acute inflammation or nephritises of the urinary bladder using machine learning.

This is a medical diagnosis application.

The main idea of this algorithm is to perform a presumptive diagnosis of two diseases of the urinary system. Afterward, an expert will make a confirmatory diagnosis to verify the results.

With proper treatment, symptoms of inflammation usually decay within a few days. However, there is an inclination to relapse. Therefore, in people with acute urinary bladder inflammation, we should expect that the illness will turn into a protracted form.

For this, we used a dataset created by a medical expert for the presumptive diagnosis of two diseases of the urinary system. See references.

This is a classification project since the variables to be predicted are binary.

The goal here is to model the probability of nephritises and urinary bladder inflammation conditioned on the patient's symptoms.

The data file urinary_inflammation.csv contains the data for this example. The number of instances (rows) is 120, and the number of variables (columns) is 8.

The number of input variables, or attributes for each sample, is 8. All input variables, except temperature, are binary and represent the patients' symptomatology (pain, nausea, burning sensation, etc.). This data set contains the following variables summarizzed as a list:

As the goal is to get a model that can diagnose one of the diseases, the variable nephritis_of_renal_pelvis_origin will be set as unused, and the target variable will be inflammation_of_urinary_bladder

The instances are divided into training, selection, and testing subsets, and set for use. Neural Designer automatically assigns the instances to 60% (72) for training, 20% (24) for generalization, and 20% (24) for testing of the original instances, and are split at random. The user can choose to modify these values.

Before the model configuration, we recommend performing exploratory analysis of the data we are using. For example, classification projects must know the distribution of the target variable in the dataset. The following picture shows a pie chart for the inflammation_of_urinary_bladder variable. 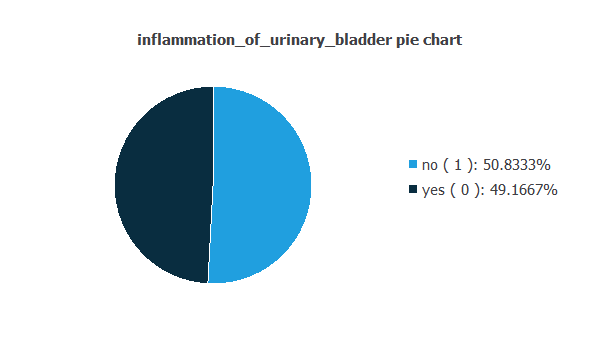 As we can see, we have the same percentage of each sample type. Therefore, the data is balanced. We will later use this information to define the parameters of the neural network.

Another relevant piece of information to keep in mind is the correlation of each input with the target variable. The chart below displays this information. 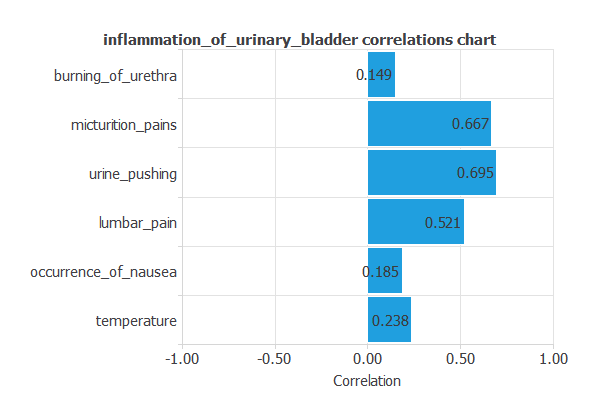 From the picture above, we can conclude that the variables with a considerable influence on the target variable are urine pushing and micturition pain, and lumbar pain.

The scaling layer contains the statistics of the inputs calculated from the input data and the method for scaling the input variables. In this case we will use the mean and standard deviation scaling method for the temperature variable, as it is a continuous variable, and the minimum-maximum method for all the other variables, because they are binary.

A perceptron layer with a hidden logistic layer. The neural network must have six inputs since the number of scaling neurons is six. As an initial guess, we use three neurons in the hidden layer.

Finally, we will set the binary probabilistic method for the probabilistic layer, as we want the predicted target variable to be binary. We can interpret this output as a probability of class membership. This layer has three inputs but only has one output. This value is the probability of the sample corresponding to a patient having bladder inflammation.

The following figure is a graphical representation of the neural network described above. 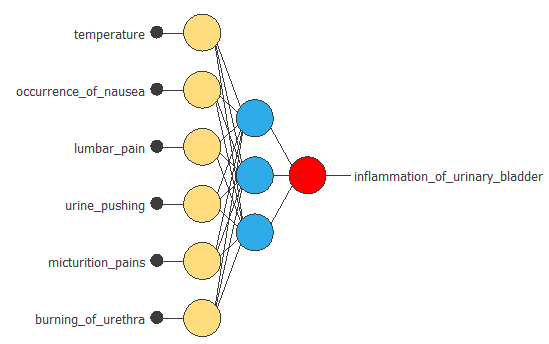 The loss index is the weighted squared error with L2 regularization. This is the default loss index for binary classification applications. 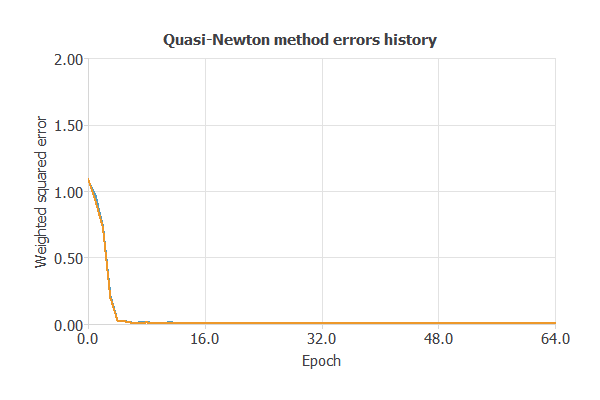 The objective of model selection is to improve the generalization capabilities of the neural network or, in other words, to reduce the selection error on the selected instances of the data set.

Since the selection error that we have achieved so far is minimal 0.005, we don't need to apply order selection nor input selection here.

An exhaustive testing analysis is performed to validate the generalization performance of the trained neural network. To validate a classification technique, we need to compare the values provided by this technique to the observed values.We can use the ROC curve as it is the standard testing method for binary classification projects. 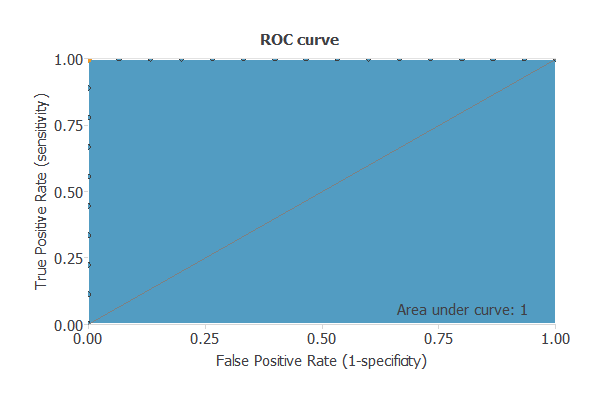 From the results above, we can say that the model is predicting perfectly.

The neural network is now ready to predict outputs for inputs that it has never seen.

We calculate the neural network outputs to diagnose inflammation of urinary bladder from the characteristics of a new patient. The following list shows some values for the inputs and the corresponding output for that patient.

We can export the mathematical expression of the neural network to a dedicated diagnosis software used by doctors. The expression is listed below.